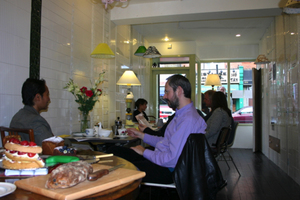 Moorland Productions was founded in 1986 to showcase the creative work of Seetha A & Kenneth Hay. We work across a variety of media including painting, printing, sculpture, installation, print, photography, video and sound. We have our own imprint`, The Moorland Press, and engage in art research, publications and several collaborations with other artists. We have evolved a method of collaborative and distributed working across our two locations in the UK and France which enables us to work on the same canvas over time, while working on other simultaneous projects.

A series of works in acrylic on canvas, exploring the various artistic styles of different cultures. The different parts of the image are executed in different modes, specific to the cultural context, but the image still remains 'readable' as a landscape or a portrait. All the works are, in a few senses, 'fakes' - they look like their sources, but are full of anomalies and self-conscious references to the styles and cultures of the past..

In a traditional landscape, there are usually three levels: Background, mid-ground and foreground. Here each level is painted using a different mode or style, derived from the historical styles of the culture in question (here Japanese); The decorative abstracted kimono style for the clouds; A landscape deriving from Hiroshige/Hokusai - the 'golden' age of 18th-century Japanese woodblock prints, and the modern photo-based style for the figure. Although each mode is essentially incompatible with the others, nevertheless the landscape 'reads' easily because we are so used to the tri-partite structure of a landscape.

This landscape uses three modes: the flat woodblock style of Hokusai for the background, the abstracted decorative style for the waves, and the modern photo-realistic style for the Geisha. The colours reflect typical harmonies of the kimono style. Exhibited at Miami Spectrum Red Dot Art Fair, 2019.

Baghat Singh was a freedom fighter for Indian Independence from the British. He is depicted in three modes: the Bollywood style of Indian film posters for the figure, the Mughal Indian miniature style for the decorative window shape and the 19th-century decorative style for the floor-level tiles. The words in the window are his call to action. The 'deaf' being the British.

Third in the series of contemporary Geishas against a backdrop inspired by 19th-century woodcut and/or traditional kimono design.

Raduit De Souches was a French general who saved the Czech city of Brno from siege by the Swedish. He is depicted in the Baroque theatrical style of his funerary monument aginst the 'faux marbre' illusionistic painting of marble from that time, and using the Baroque drawing style of Poussin where only three tones are used: dark, mid-tone and light, to suggest roundness of form. The decorative element is derived from Bohemian embroidery patterns.

The Chauvet Cave in SW France, discovered in the 1950s, contains some of the most beautiful paleolithic cave paintings ever found. German film director Werner Herzog made a film about it: "Cave of Forgotten Dreams" which gives a good sense of the power and mystery of the imagery. Here, the 'forgery' aspect obviously relates to the notion of a 'signed' painting, on canvas. The font used is called Fred Flintstone..

In this image of Egyptian Queen Nefertiti, the Hieroglyphics on the left read "Moorland Productions" (the nom-de-plume of Seetha A & Kenneth Hay), and those in the cartouche in the centre read: "Seetha and Ken Made this image".

Piet Mondriann left his last painting unfinished. Moorland Productions have finished it for him, and included the artist, flattened into two-dimensions, into his work.

An on-going series of screenprints combining hand-drawn and photographic/litho techniques as used by Andy Warhol. Usually 3-7 colours, on Arches Paper.

From a series of portraits. Five colours, Transparent ink for the eyes. Size: 83 x 106 cm.

Checkpoint Charlie was the nickname for the key crossing point between the former East and West Berlin. It was a point of historical tension with a heavy police presence. Moorland Productions (Seetha A & Kenneth Hay) were in Berlin just before the Wall came down in 1989, Seetha was doing a German Interpreting Diploma in East Berlin and Ken was on the Western side, crossing through the border everyday bringing gifts from the more affluent West.

At the time I met him in Fat Tuesdays New York, Les Paul had his arm set rigid in the 'playing position' following a car accident.
He was in good form though. The colours reflect an Andy Warhol/Pop art aesthetic.

From a series of documentary images reflecting human reactions to political events. Whilst fear might, at times unite us, unity is nevertheless strength.

Flowers have been a continual source of inspiration over the years. They afford an excuse for some bright clear colour and tight drawing.
The complexity of form, and the play of light and shade becomes an engrossing abstract pattern across the canvas surface.

The complex form of the Agapanthas stamens, lit by the sun, is contrasted with the dark shade of the garden, like an upturned chandelier.

A complex filigree of yellow and orange against the dark shade.

The spiky leaves delineate flat patches of colour and light.

"Fair Horizons" in Welsh. Normally blue recedes. Here the challenge was to make the blue hydrangeas work as a foreground colour against the patchwork of filelds.

For me colour is the aspect that makes painting special, and painting flowers gives the artist an opportunity to use pure vibrant colour like no other. Drawing locates each 'piece' of colour tightly in its place, so the canvas knits together from edge to edge with nothing vague or unresolved. Cézanne used to say "The more the colours cohere, the tighter the drawing becomes"...

During COVID, I 'travelled' to Tahiti using Google Earth, looking for some of the places and sights that Gauguin might have seen and explored, but never painted. This unusually shaped and coloured orchid hangs down on tendrils from the forest canopy.

An Hibiscus in a colour that reminds me of the pinks in Gauguin's paintings, set against the darker forest greens.

A series of works which reflect on our preoccupation with security, surveillance and control. The RFID chips commonly found in products like CDs or books to monitor supply and prevent theft are omnipresent. Curiously, their circuit format also resembles the structures of arenas, labyrinths or the raked gravel of Zen gardens - which all have to do with mental or physical coordination or control. The colours and forms also hark back to American abstract painting of the 1940s and 50s as well as to the later Neo-Geo of the 1980s. These paintings are produced collaboratively with Seetha A. Both artists work on the same canvas, building up different superimposed physical and temporal layers.

Acrylic on textured acrylic with metalic and interference pigment. 100 x 100 cms. Recently bought for a private collection in the UK.

Acrylic on acrylic textured canvas, 100 x 100 cms, 2011. The footprint of the running shoe and the gold foil reflect the Olympic spirit.

A screenprint executed in Joan Miró's studio, Mallorca, Spain during a one month residency at the Joan & Pilàr Mirò Foundation, Mallorca,

Acrylic and texturised metallic acrylic on canvas. 100 x 100 cms. The title refers to the metallic chip in the centre. The colours and form reflect Don Judd's minimalist work.

Oil on canvas, 30 x 30 cms. The graphic design of this RFID chip seems to suggest an alien script.

"Whispering Zen Garden", plastic rocks, shredded paper, CD audio stereo soundtrack, hidden speakers. Part of the "Control Mechanisms' show which toured to Prage and Brno, CZ. The soundtrack was of whispered paranoid secrets and fears in male and female voices alternating from hidden speakers inside the two artificial rocks. The rocks were manufactured by the special effects producer for the James Bond franchise films. The shredded paper and rocks refers to the shredding of secret documents, and the use by British Secret services of rocks in London Parks to hide secret messages for its spy network.

Acrylic and metallic paint on Arches paper, 30 x 30 cms. Inspired by the cast iron drain covers near Buckingham Palace. During a Royal visit, the manhole covers are security-checked for explosives.