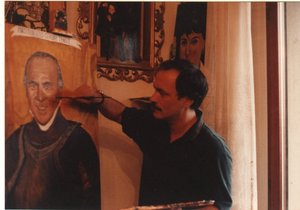 Born in Genoa in 1949 from a noble Family, he completed his artistic formation with the studio of the woman painter Clara Molfino.

In his artworks the effective representation of reality combines with magic symbolic elements, which bring to a more subconscious and secret world. In the characters represented on can discover silent and fascinating messages.

He took part in various exhibitions,obtaining great success both with the public and thr critics.

His artworks are present in qualified collections. His artworks are shown in Art Diary and in the Art Yearbook "Comed-Guida ragionata delle Belle Arti" His studio is in Gorgonzola, Via G Matteotti,77, a town not far from Milan.

They sayd about him:

"In his artwok the choice of colors is enriched by his vigorous and effective brush strokes and a very personal style. His expressive characters come from a dark classical background and are so lively that seems to have a their own lives".(Daniela Martelli)

"Magnani images develop into a lyrical intuitive dimension and they are always very personally chosen as a true artist does".(Angela Ottone)

"Magnani 's main subject is the woman and he represents the body free from spiritual and ascetic tentation. He is inspired by the classical idea of feminine which he represents in a strong, sensual way, wich is sever vulgar."(Vittorio Abrami)

TRIBUTE TO THE WOMAN

“The woman in red”