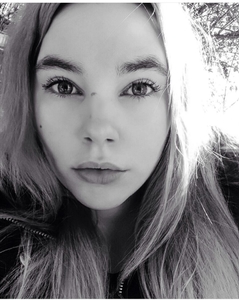 Timka Szőke is a Hungarian artist. She was born in Budapest - Hungary.
She studied in Secondary School of Visual Arts, where she studied sculpture. Then she studied stainedglass design and enamel design in Simultaneous Fine Arts School.
She graduated in Metropolitan University's Art faculty as graphic designer in 2013.
Her versatility unfold in illustration, lead glass design and photography.
She had always of various surrealistic ideas, tales, legends, mythologies.
Her artworks are inspired by the antique art trends, most notably Renaissance, Expressionism, Baroque, Symbolism and Art Noveaou in addition the cartoons and comics. She likes to combine old styles with new trends.
Her characters carry a natural, special beauty. She loves to display the facial mimicry that she spices with natural charm in her works.
She also likes dreamy childish themes that are both visionary and realistic, facile, more cheerful. Whether it is a fictional fantasy world where anything can happen, we can be anyone and we can go anywhere, because nothing is impossible.
She works in pop surrealistic style. The classic, natural beauty characterizes the characters of her artworks.

The nature is art itself. Not only the universe, but the main source of inspiration. The nature is impressive, captivating, with all its elements perfect. Nature affects all artistic trends - be it fine arts, architecture, photography, film or anything else - always brings harmony. Like everyone else, it always fills me with positive energy, which is reflected in my works.
Nature is rich in various colors, shapes and materials, in which we find so many possibilities. It is almost incomprehensible, indescribable and inexplicable, the fact that we exist in it. There is always an amazing feeling about how each element of nature is intertwined.
I attempt to give this feeling back to my pictures, as in this artwork.
In this picture, I focused on the miracle of nature. Here I wanted to draw attention to plants, flowers and the wake of the season following the spring.
A beautiful flowery meadow, or a magnificent flower garden, expresses the perfect harmony of nature. In this picture the beauties dominate, the plants and the human, the classic female beauty with little tiny secessionist sentiment. The nature is eternal beauty.

This idea of the picture has been in my mind for some time. Always fascinated by the delightful look of classic sweets. Be it for the beauty of confectionery or the most desirable products of confectionery factories. Besides their taste, the appearance of sweets / products is also important. After all that is what seizes and enthralls man as an enchanted fairy tale. A taste of sweets brings memories, experiences and enjoyment to one's life. We remember the classic childhood flavors that can be linked to an experienced experience. To say, a small tasting from a tiny memory that we think back with love. These thoughts inspired the background of this image. The op-art effect of the vibrant background captivates the viewer.
The complexity of the image is based on the detailed background and the delightfully charming figure. The portrait depicts an enchanted, almost hypnotizing look of a fairy girl who appears as Willy Wonka or as white rabbit in Wonderland in the dense-bulk sweets world. The portrait's charming personality can be likened to a comic strip character. Her haircut, as well as the candies with her pastel shades, made me kinder. The ponytails can be compared to a kind of sweets.

The image combines the world of pop art with postmodern, abstract and surreal elements. The focus is on a young girl who "lives" in an enchanted dimension where anything is possible. It's a world where a cavalcade of colors and retro patterns blend in with the colorful sky. A copy of liberation, rebirth and spiritual projection radiating positive energy is presented to the viewer.
She looks at us confidently, like a superhero who has returned forcefully from the captivity of long gray, conveying the positive message that we, like her, can create a happy, liberated, colorful world.

An image has multiple meanings. In one, it presents an image of a vibrantly exciting dream. As if we had fallen into an enchanted surreal dream like Alice. The abstract colors around the portrait give the image dynamism - it's like, that we going through tunnel to another world where all kinds of special things happen. It's like a mysterious but positive black hole for the viewer.
The flowers lightly frame the face, which are symbolic representations of the new world we are about to approach.
My other concept was what would happen to us if we dropped into another dimension after our usual life on earth.
From my point of view, the subject does not appear as a dramatic, gloomy, mysterious "scene", but as a colorful, incredibly vibrant path that leads to another dimension through an alien but positively adventurous path.
The rose, like the tulip, is one of the ancient symbols of rebirth. And the banana leaf appears as the first fame of the new world, as does the first "inhabitant" of Paradise.
This image is a kind of especial projection of an abstracted spiritual journey.

The image was inspired by antique stained glass art. The character of the scene and the elements of the given venue are expressed in lead-like thick contours.
An elegant, aristocratic renaissance woman dressed in glamorous lady looks grimace to the viewer, creating a sort of surrealistic effect. Unlike the usual stained-glass paintings, the female figure now has a special viewpoint. Her uniqueness is further enhanced by her albino features, which, even with the shades of the dark dress, become even more pronounced. Her unusual archemistry suggests the trendy, iconic poses of pop culture. Even a self-portrait photo on a social media.
The acanthus leaf and ornaments of the lateral columns also enliven the characteristic motifs of Renaissance art glass painting.

“The spirit of the forest”

I am very interested in environmental protection, as do many in the world. Unfortunately, I am sad to see that the forests of the planet are diminishing and new plants / trees are barely growing. I was deeply touched by the destruction of Brazilian primeval forests and Australian forests. I was horrified to see what was happening to the world, how everything that was essential to a healthy ecosystem, to life, would be consumed. I also believe that nature is life itself, so we must pay attention to it and protect it.
This image depicts the soul and spirit of the forests, a mysterious female figure, just like the mother earth. Anyone who is frightened, terrified and deeply pained is the death of her "children" - the forests.
She looks in hidden at the viewer with dramatic sad eyes in the dense of the remaining jungle the beautifully blooming, from the leaves of life and shelter, as a mythological creature, but she is much more than that.
However, this world - which she was the protector of an unimaginably lofty power even when there was no human being on Earth yet - is also in danger, where she would find peace in the ring of lush vegetation, so she looks at us with anxious eyes. .
I imagine nature, wildlife as a similar mystical "spirit" who protects them, like their children, as gods of ancient mythology.
The main message of the picture would be to give no further reason to their fears.