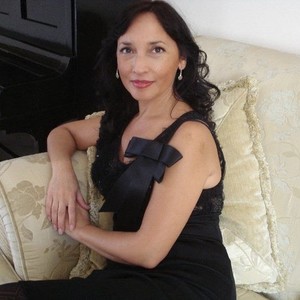 The colours of soul

Anna Poerio's paintings are based on the harmonic gracefulness of movement. Her figuration is extremely intimate, rich of real values and deep analysis, where meaningful aspects of form and content coexist. The suggestive themes of inwardness portray, with realism, light and seductive figures that dance spontaneously in a delicate scenery, in a dreamy atmosphere. The human body merges not only with nature, but also with the whole universe. The sinuosity of dancing bodies conveys messages of beauty and harmony. It is a sort of spiritual elevation and at the same time a means to establish a contact with other beings, an ideal hug with humanity. Technical ability, structural meticulousness and rigorous chromatic layout reveal an original, autonomous and refined style. The strong communicative and representative ability mixes with an artistic validity from which visible talent emerges.

“The roots of life”

In this painting a man and a woman are in the centre of the scene. The upside down woman points her hand to the ground while her leg points upward, indicating human beings’ intermediate position between heaven and earth. On the right and on the left, an ikebana floral composition stands for the essential union between Nature and humanity. The fusion of nature and human being is the necessary and inseparable condition of life.

A woman dances in the space with a red dress. A woman and a red moon symbolize the identity between human beings and the universe, between microcosm and macrocosm: every human being is a microcosm, a miniature world, since his structure (both anatomical and psychic) repeats the one of the universe.

“The dance of time”

The woman in red dances in the air. The wide red skirt represents the rotation of the earth and on the floor a sun clock reminds that time goes by.

“Dance in the moonlight”

A dancer flies in the space between Earth and Moon in a dreamy atmoshere.

“The door of Infinity”