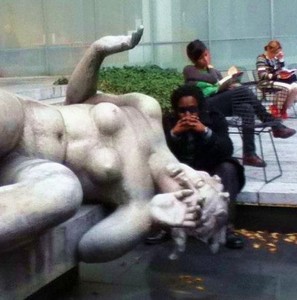 Vernon Woodroofe is a Boston based visual artist. Although his more noteworthy works have been in the realm of large scale paintings, murals, photo-montage and collage, he has been an avid sketch artist throughout his career. As a peripatetic man-about-town, he has found the sights, sounds and symbols of the city an inspiring springboard into creative expression. Whether in Boston, London or Allahabad, India, he is truly one, who in a Rauchenburgian sense, lives in that “gap between art and life.”

His work, often done with whatever implement is in his immediate grasp: a ball point pen, a #2 graphite pencil, a cocktail napkin, a surface, becomes a seamless confluence of lines, leading into shapes, reflecting multiple facets of figures, representing an abstracted physical reality and revealing the spiritual and psychological impact between his external and internal worlds.

Vernon is clearly influenced by Jazz, city life, and artists such as Edvard Munch, Pablo Picasso, and Jean-Michel Basquiat, however, he has developed and maintained an unequivocally unique aesthetic, and powerful personal symbolism, derived from his astute insight and undeniable talent.

Vernon’s sketches, secret snapshots of his impressions, are private vignettes, and most are mere explorations, unintended as finished works. His oeuvre is provocative for its timeliness and timeless universality.

He has wrestled with racism, its subtle and subliminally dangerous messages in media and society, the impact of fear and intolerance on his life experience. Conversely, he expresses his pride in his Caribbean-American heritage, the beauty he sees and reveals, in particular the serpentine lines of dreadlocks and curvilinear curves of female bodies.

He often overlaps and fuses symbols, boxes a figure into a trap, both confining and defining him. The recurring theme of romantic love is a prominent one: the blurred boundaries of hearts and physical interconnectedness that paradoxically brings the figures into extraordinary sensual unity while simultaneously enveloping and restricting them.

Sketch of an upcoming painting.