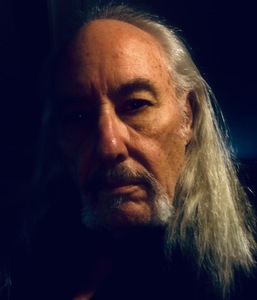 DOUG HUNT has been driven by creativity for as long as he can remember.  From cartoons to hot rod art, from psychedelic imagery to architectural renderings.  Commercial illustration, logos, grocery store interior decor, photography and fine art. Not  to mention all the little bits like leaded glass, pottery, sculpture, encaustics, print making,  digital illustration, animation, there's not much he hasn't tried. "It's all just too interesting" says the artist.

Fine art was always the goal. As a child Doug was fascinated by art, music and trucks.  He spent 32 years as a working artist and hobby singer songwriter. In 2007 when the  U.S. economy collapsed he became a truck driver. Driving a truck gave him time to focus  on music. He now has a catalogue of songs and performs his original music in the  Portland area.

Doug started showing in galleries in the mid 80's. His first show featured castle drawings  of German castles he'd created in the early 80's while working in Wiesbaden Germany  as an illustrator for the American Military Club System. By the late 80's and early 90's  the artist was showing in galleries in Oregon and Washington featuring mostly oil paintings.

In 2000 he was picked up by a traveling art rep, Island International located on Guemes  Island in Washington and in 2003, moved to Ray Stock Fine Arts of Denver Colorado  selling original oils around the United States. Eventually 2007 rolled around.

His work often reflects a calm solitude, "I prefer to be standing alone in my paintings and I hope the viewer feels as if they too have escaped to a quiet place".  They are warm and inviting and sometimes, depending on the subject, whimsical. His use  of light is what draws you in. That along with the wonderful texture make his paintings a joy to look at. His medium of choice  is oil paint sticks.

The medium for most of my paintings is Oil stick. I enjoy the unique texture created by moving the paint around as I blend the colors.

“Path to the Farmhouse”

6.5x10" Oil Stick on watercolor paper. Varnished. Unframed. Path to the Farmhouse is a series title

“Guardians of the Pearl”