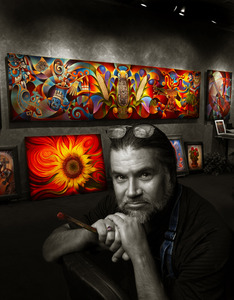 Born in Torréon, Coahuila, Mexico, self-taught artist, Ricardo Chávez-Méndez moved to Albuquerque, New Mexixo at the age of 28. The use of the airbrush for detail in his earlier work has earned him the nickname, "Dali of the Desert," by Airbrush Action Magazine, an apt comparison which he relishes.

Ricardo is truly an extraordinary artist. He is introducing the style "Curvismo™" or curvism by way of teaching and gaining a following into the movement. He is also the master artist of technique, color and composition, leaving a trail of awe inspiring art for the art lover, collector and critic alike.

Publications include, but not limited in the "The Biographical Dictionary Encyclopedia of Mexican Painting", "Who's Who Among Hispanic Americans", "New Mexico Millennium Collection" and "Triumph of Our Communities" as well as local New Mexican newspaper and magazine articles.

His works are included in private collections nationally and internationally, including former First Lady of the United States, Laura Bush and former First Lady of Mexico, Marta Sahagún de Fox. He is co-owner of ORO Fine Art Gallery, the hidden treasure of Albuquerque, New Mexico where he teaches privately as well as group instruction, showing his work and maintaining his gallery and office of graphical and computer design, CYBERDESK Solutions.

~ ARTIST STATEMENT ~
"Art presents itself with a certain kind of energy proceeding from our innermost being so logic or can intellect be art. At the present time there are many people who believe themselves to be artists, just because they are able to paint on a piece of fabric. Art demands discipline and dedication. Art is the most beautiful way to express the talents that man has inherited; that is why it should not be taken as a means of satisfying the "ego", nor a "pose" in regard to society. Consequently Art should only have one purpose in mind: to create. ~ Ricardo Chávez-Méndez ~

Just as the style Cubism or Cubismo (introduced by Picasso and Braque more than 100 years ago) displays several aspects of the same object simultaneously by fragmenting the form. Curvismo™ or Curvism connects all objects in a continuous path. For instance, Curvismo™ manipulates curves by depicting a path of a continuously moving point, layering of transparent color by superimposing warm tones and cool tones (and vice-verse) to create an optical blend. Concave shapes morph effortlessly into convex forms to create a soothing flow of energy. Picture a lava lamp with the flow of the wax gently floating in suspended animation. One dollop of wax displaces another and even the liquid is considered part of the equation for it creates a space (topological space) that is displaced by the wax creating a curvilinear motion. In a not so tangible form, an example of Curvismo™ can be a conversation between two people. One person speaks while the other listens in reciprocity, the message is the connection between the two, the continuous line returns when the other person acknowledges and the message morphs into feedback. On a bigger scale, an example of Curvismo™ could be the human race, we live in a symbiosis with the animals and earth - we are all connected by a network of energy. You can not separate one from the other without adverse effects and all energy you take you must give back to the Earth so there is a cycle (or Curvism) to life. We live in the round surrounded by emanations of energy because we all radiate energy. In all of Ricardo’s work this energy is symbolic of religion. Whatever God or force is believed in, Ricardo symbolizes this through Curvismo™. The flow of creativity comes from above, in Ricardo’s belief, from God. He is just the instrument in which this energy or force manifests into this world.

Precursor to the On Sacred Ground Series inspired by authoress, Bonnie Jo Hunt.

“On Sacred Ground Series I”

This is the first in the On Sacred Ground Series inspired by co-founder of Artists of Indian America and authoress Bonnie Jo Hunt. "The concept is that life is one wondrous circle that starts from the earth and ends in the earth and we are surrounded by circular events and beings. We see the seasons pass: Spring-Summer-Fall-Winder. We stand on Mother Earth, a circular ball - the sun, the moon and the stars pass around us in great circular sweeps. - taken from The Curse of Gold, book by Bonnie Jo and Larry J, Hunt"

Masterful artist, Ricardo Chávez-Méndez, honored authoress, Bonnie Jo Hunt, by choosing her as his subject for the centerpiece of an American Indian painting series entitled, On Sacred Ground Series. In the painting, he captures Bonnie Jo performing The Lord's Prayer in Universal American Indian sign language.

In 1999 Papalotl Rosalis was created, still calling the style Surealism and he continued creating more work in this Surrealistic style.

The first image in the Curvismo™ Florals style. A very popular image that is in the private collection of Terry and Phil Stryka, Corrales, New Mexico. This image has been so popular that it has been reproduced in giclées of the original size down to greeting cards suitable for framing!

In the private collection of Steve and Beverly Gallegos, Albuquerque, New Mexico

Beautiful images of the female body done in the Curvismo™ style.

In the private collection of Mary Flores, Albuquerque, New Mexico