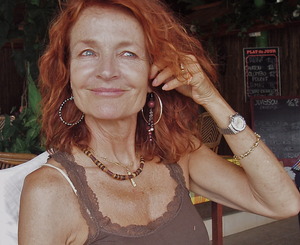 The Paintings of Iréne Salley

The oil landscapes of Iréne Salley capture the earthy, vibrant essence of North Central Florida through the eyes of a French post-impressionist. Her swirling strokes and shimmering colors seem to literally swim over the canvas. In some paintings the local beauty of her Gainesville home is captured in blithe, animated tones. Each painting explores the boundaries between what is seen and what is imagined to be.

Salley, who was born in Guadeloupe, a small, tropical island in the French West Indies, realized her passion for art when she moved to Paris in 1974. Her ties to France and the post-impressionist movement that began there can be seen in her spontaneous, emotional style, which evokes the Fauvist flavor of Paul Gauguin, Maurice de Vlaminck, and Vincent Van Gogh.

Salley's subject matter is now influenced by her American experience. In fact, it wasn't until she moved to Florida and discovered the natural beauty of the American Southeast that she began to paint. The rolling prairie landscapes, the indigenous flora, even the marshy swamplands of south Florida have inspired her to put oil to canvas, where Paris, that "city of stone" as Salley calls it, and its imposing architecture, could not.

Like the artists who have influenced her, Salley is in love with color and motion. Each painting dances with excitement. Salley is not concerned with capturing the physical details of the image before her. Rather, she is intent on expressing the emotions those images convey. She applies her paint in rhythm to the moods within and around her, painting in giant, surging brush strokes or short, rapid swipes of the painter's knife. She is, in fact, in love with the process of painting almost as much as she is with the subjects and stories of her art.

oil painting on Linen 40"x30"-A little spot of the garden, when Spring is pointing its nose, when the sun shows its glory and when I am lucky enough to notice

oil painting 30"x40". Driving on country roads can take you to little paradise of colors and beauty.

oil painting 40"x30"- When the Azaleas around the Studio are bursting with joy.