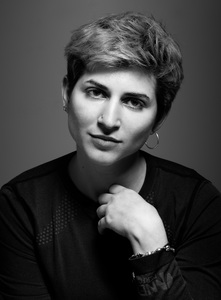 Lara Maltz, Buenos Aires, Argentina, 1992. She is a Visual Artist and Director of Stop Motion Animation.
Graduated from the Scenography career at the Metropolitan School of Dramatic Art (EMAD), in 2014, in Buenos Aires.
Trained in workshops with different artists in disciplines such as engraving, drawing, painting and sculpture.
She continues her studies graduating from the Master of Stop Motion Animation, at the Barcelona Film School (ECIB), in 2019.
Currently lives and works in Barcelona, developing her art work and short films.

Characters with deformed and exaggerated features,
rejected by society.
Monstrosity and beauty coexist in a melodrama
made up of multitudes in search of their disguise.

Path of transformation, where the human suffers a physical and mental disintegration for a new fusion of an ethereal character. Where the feet are uprooted from the earth, the body and soul are stripped of their disguise, and all thoughts are thrown into the air, giving rise to lightness and freedom to enter a new state of being.

This universe is made up of the individuality and diversity of each character, where the energy of the woman represents a unit of force majeure.

Inspired by characters participating in the circus world, such as bearded and Siamese women, where he invites us to broaden our perception of what we consider normality.

Bearded Siamese women invoke the symbol of duality, the sensation / perception between feminine and masculine as well as two minds gathered in the same body.

Her androgynous character figure emphasizes feminine and masculine forces, as well as the ability to fuse with elements of nature. Enabling its own construction, in a heterogeneous way from different energies.

With a grotesque style inspired by the circus world, an everyday situation is represented that represents the bond between the mother and her child; consequently of their own bodies that condition them.