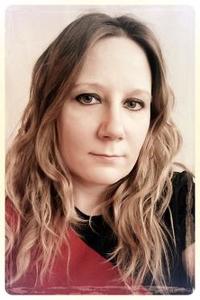 In 1994 I enrolled at the Enrico e Umberto Nordio Institute of Art in Trieste, where, thanks tothe professors, I gained an important starting point for my further education in the field of art.Under the guidance of Professor Livio Schiozi, I studied at the Painting and Decoration department and successfully graduated in 2001.In the same year I moved to Florence and attended lectures of Andrea Granchi at Accademia di Belle Arti. I quickly found inspiration in this new environment and completed four years ofgraduate studies with great results. I also completed pedagogical-andragogical education at the Faculty of Education in Maribor, while living and working in Ptuj. I currently live and work in Lukovica near Domžale, where I also started a family.

Her work is based on three main elements: space, substance (material), and light effects on it.Though, how is the space presented? For Andreja, space is an infinite element, unlimited, often indefinite, yet possible. It relies on the Surrealists, the works of Magritte (spatial concept) and Salvador Dalí (visions from the subconscious).With a passion for architecture, she follows clean geometric shapes (lines), strictly perspective construction, with clear, precise, almost incised lines. In her compositions, stone is repetitively used as main material. A cold, soulless (lifeless) element, yet imprinted with movement, at times hovering or swirling, which invigorates the substance and imparts characteristics that are completely contrary to its natural properties. Movement is staged by invisible forces that transfer, move and push objects in a given direction.But, does this movement achieve any goal? Does it lead in a specific direction? Of course it does. The goal is always present, even if it’s hidden in the fog or lost in an infinitely distant focus of perspective which is a predetermined point.The goal is like a light at the end of a tunnel, a solution... A parable of life? A quest for answers to eternal questions? Of course. For Andreja, painting is like a window with a view of the infinite. Her search leads to a conclusion that we are not capable of determining the beginning and/or the end of things, nor are we able to determine the reasons for their existence – all of that is visible in her constructions.Let us now try a closer analysis of some elements of her work:Earlier I mentioned the concept of infinite space – indeterminate but possible – I think this is well presented in most of her works, especially in the representation of consecutive doors. They open one after the other, allowing us to look into new spaces which keep confusing us anew – there are no clear boundaries. Constructions are often dispersed (exploded) or floatingin the air, entangled in a movement whose direction is difficult to determine.In this series of works, some works are also developed in three-dimensional terms, taking on the appearance of low and high reliefs, thus expanding the concept of spaciousness.One more thing to be analysed is the effect of light. Andreja uses strong, bright light, which very precisely defines the forms and the substances which make these forms. Light has a suggestive meaning as well – with its intensity (or intensity of colour) it emphasizes momentsand different life situations. Changing light can produce a phase or situation, such as the light at the end of a tunnel, or the absence of it at the end of a well, which may or may not be a presence, a hope, a solution or a failure.One last thought: shapes…
These can also easily be understood in a figurative sense. She focuses on elementary solids: the cube, the pyramid and the sphere. For each of these bodies, she also gives us an insight into its empty interior. What does she want to say? That the body is nothing but what it presents? Or is it an invitation to it’s interior? That we shouldn’t stop with the exterior of the objects, but should try to experience their depth; that we should trying to get past their appearance and get inside of what is hidden from the eye.

That a vision is a subjective act is a verified and generally confirmed fact. Whoever is watching, usually sees not with the eyes, but through the vision that materializes in the brain, in the seat of our intellect. It could easily be an act – a sterile, objective, unanimous; in short – not lent to interpretation; the same for everyone. But it is the mind, imbued with all our feelings, passions and experiences, which uses a “filter” to distort the lens through which we see our image of reality.With this set of photographs, Andreja wanted to show the mechanism of the subjective aspect, using various filters which hide the human body and prevent direct view, but still allow the observer to predict the shape. A bedsheet, wrapped, wrinkled, wet – rather than glass or natural materials – has replaced, or, in other words, suggests a veil which is the same subjective filter everyone carries within and uses unconsciously when watching.The second element of the view is unquestionably light, since without it, no perception wouldbe possible.Here, light was used as a tool to rediscover, hint, confuse, or hide the forms used, with an almost Flemish inspiration (the memory of Ingres and Caravaggio), playing with gentle and gradual transitions, from a dazzling white to completely black shadows. The tool – light – creates an image as long as the conscience filter captures it.Since 2009, her research on “veils of consciousness” has evolved from a two-dimensional photographic expression, including a three-dimensional plane with some plastic parts. In the sculptural works “The Unconsciousness of Life,” the Unknown Image, the Invisible Grip, assumes the concept of the “veil of Maja”, which subtly prevents direct contact with the true essence of the object, bringing it to a wider sensory level, not only visually, but on a tangible path to exploring the perceptual subjectivity of the complete sensory sphere (sight, touch, hearing, smell).

Sculpture in glas of natural elements