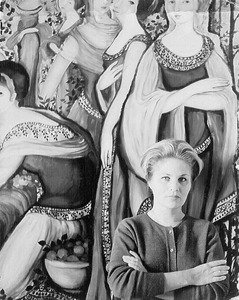 Erna Y (Antunes) was born in Skopje, Macedonia on November 14th.
At the age of twelve she had her first exhibition of drawings in the city of Pancevo, Yugoslavia.

She studied at the Fine Arts School of Graz, in Vienna, Austria, where she graduated in 1948. One of her masters in Graz was Ziskovic.
Living in Brazil since 1949, Erna Y became a B...razilian citizen in 1950.

In Brazil Erna Y has worked continuously on her painting, sculpture and tapestry.
Her inspiration comes from both nature and humankind. Man is intrinsically connected to nature but is slowly destroying it. With her art Erna wants to bring Man back in contact with nature and its beauty. A return to nature is a return to the love of God and his creation.

With her experience Erna was the mentor and organizer of 1st Cultural and Arts Festival of Ouro Preto and Mariana (Brazil) in July, 1965 - the very first festival of its kind held in Brazil. Since then the Mariana and Ouro Preto Festival is held yearly and served as model for art festivals throughout Brazil.

Erna Y has been a member of the Brazilian Fine Arts Academy since 1970, and shortly thereafter she received the Pedro Américo Gold Medal of Honor.
In May, 2008 she was honored with the MEDAL OF VERMEIL by the French Societé Académique des Arts, Sciences et Lettres founded in 1915.

Universal ambassadress of Peace
within the framework of the Universal Circle of the Ambassadors of Peace - France & Genève Suisse.