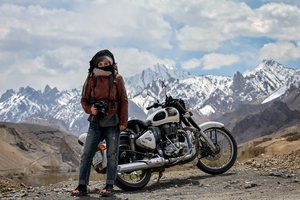 Aga’s professional journey begun with fight photography, during the time she lived in Thailand. Muay Thai was one of her many passions and when she was presented with the opportunity to cover Muay Thai fights she didn’t think twice about it and had the best time of her life doing it. During her life in SE Asia, Aga was able to travel extensively, had many adventures, and met many fascinating people, eventually, a few years later her journey took her to Indonesia and South Africa. Aga’s passion for photography and travels is shared with the passion for science, as she spends most of her time trying to cure people and the planet.

Aga actively supports human rights movements, environmental protection, and various conservation efforts. Aga’s assignments involve both freelance work and collaborations with various NGOs. She believes that photography should be evocative and revolutionary, an artistic expression free of conventions. She aims to portray people she photographs in the most powerful and meaningful way she is capable of achieving while making a difference in communities she continues to work with.

Around the 16th century, Himba people crossed to Namibia from Angola, settling in Kaokoland (Kunene) as part of the Herero tribe. Impoverished by disease and Nama cattle raiders, Himba were left without livestock, forced to rely on the land for their survival.

Himba women are said to be one of the most beautiful in the world. Fiercely proud of their traditional hairstyles and clothes, taking several hours each morning for their beauty care, sleeping on the wooden pillows not to ruin their hairstyle. Both men and women take great care in wearing their traditional attire, clothes, hairstyle, and jewelry are all of particular significance to the Himba and are part of their tradition and culture.

At puberty, the girl will wear braids up front covering her face, letting males know that she isn’t ready to marry. When a young woman is ready to marry, the same locks will be braided toward the back of the head, allowing potential suitors to see her face. First, the hair is lengthened with a straw woven together with the hair extensions to create dreadlocks, which are subsequently covered in otjize and finished with goat hair, added to give the distinct pom-pom look. When a woman has been married for a year or has had a child, she will wear the erembe headdress on top of her head.