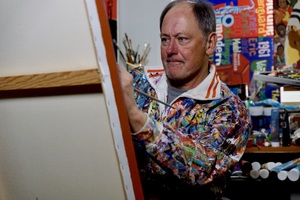 Steve remembers the first time he realized that he might have more than an average interest in art, "The whole class of Miss Doris' Kindergarten voted for me to draw and paint all of the backdrops for the Spring Play." His work was always included in the young artist surveys at the Arkansas Arts Center, and chosen for surveys at the Brooks Museum, in Memphis. But he really didn't start painting until 1997. He set about working out a unique personal style. "I came in from a folk art angle. I developed a set of rules: I could only use paint directly out of the tube. I could only use three brush sizes. I painted solely on cardboard." He gradually loosened the rules, allowing himself to mix two paints together. "Starting with outsider art allowed me to work out the styles of representation that I was interested in." Steve began including sly nods to pop art, abstract expressionism, cubism, Matisse, Picasso, "You name it and I've probably slipped something in. I am unashamedly post-modern. But always in the service of a fun, balanced image." Painting means a lot to Steve, and his works populate the walls in the home he shares with his wife and two children. "People kept asking if they could buy my stuff. One day I finally said Why not?" Besides the awards bestowed by the Arkansas Arts Council, Spencer's been honored as the artist of the year by "Jazz Colours" magazine, and featured in "Spitball" as the Baseball Artist of the Year. He's executed commissions for the National Pastime Museum, the Kellogg Foundation and dozens of private collectors fanned out across the U.S. Recently, he was recognized as a Regional Artist by the Crystal Bridges Museum of American Art. In 2019, Steve was brought in by Google to create the images for B.B. King's Google doodle. His work has been licensed to a collection of boutique hotels. Here's a link to the behind-the-scenes video for the Google Doodle: Behind the scenes video about the Google Doodle: https://www.youtube.com/watch?v=JTb4wUZhBRA