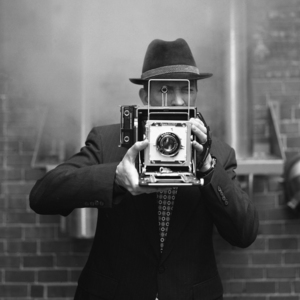 Stephen Sheffield, a native of the Boston area, is an alumnus of Cornell Univeristy in Ithaca NY, where he obtained a BFA in painting and mixed media. He went on to receive his MFA in photography and mixed media from the California College of the Arts in Oakland CA, studying directly under and was assistant to Larry Sultan as well as studying under Jean Finley, Jim Goldberg and others.

Sheffield’s large format black and white photographs are influenced by film noir, crime novels and the projected memories of past eras, Sheffield constructs iconic moments of mystery, ambiguity and male insecurity. Often the photographs depict Sheffield’s displaced figure dressed in a suit standing, crouching, turning, walking and leaning. The figure will sometimes be blurred from movement, heightening the sense of surrounding stillness.

As a fine art photographer and mixed media artist, Stephen Sheffield has exhibited nationally for 30 years. He also has many permanent large-scale private and corporate art commissions in Boston, Connecticut, Philadelphia, New York and Pittsburgh and more. He is adjunct faculty at the New Hampshire Institute of Art MFA Program, and he ran the advanced fine art black and white department at the New England School of Photography in Boston for 12 years.