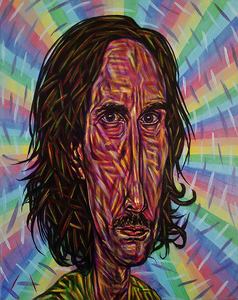 5 of my most powerful paintings

“Land of the Black Sun”

The Chicago skyline at sunset - acrylic on canvas - 48x60 inches

This painting has been sold.

“Mirror at the End of the Road”

A painting inspired by underground 60s folk musicians Mel Lyman and Charles Manson. Lake Shore Drive is a road with the psychedelic initials.

This piece is about the gnostic myth of Sophia creating the demiurge (who created the material world). Early psychologists reinvented the wheel when they came up with a new platform based upon ancient spiritual teachings, repackaging religion as science. This piece is about the act of compartmentalization, projecting undesirable traits onto the judgement of others.

Ever since my third eye began to open, I've had spiritual visions which could be thought of as astral projection or out of body experiences, which I of course painted when possible. Only recently did I come across a quietly declassified document that the CIA had under wraps since at least 1980 which shined the light on what I had experienced. The Monroe Institute worked in conjunction with the government on what they called the Gateway Project, using hemi-sync technology to enhance what are thought of as psychic abilities and higher consciousness in order to locate a portal that leads to a state of being beyond the universe as we know it. To make a long story short, this is a painting of that Gateway.

One of the very first things I learned in my pursuit of esoteric knowledge was how to use the LaVey Personality Synthesizer. As elementary as it is, it's still a basis for how I understand the human psyche. In fact, it's that simplicity that makes it far more useful to me than popular systems like astrology. This painting represents the 3 layers of the personality as one being: one with the apparent self being the organism, one with the universe, one with god.