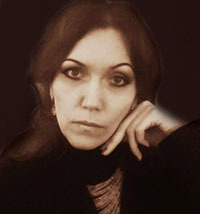 My name is Elena Petryk. I paint paintings in the style of esoteric practicalism. The love of art appeared in early childhood and already at the age of 10, I entered art school, and later graduated with honors
Ukrainian Academy of Arts in Kiev. For a long time I worked as an architect, created various buildings and at the moment I have a license of an architect.
The cornerstone in my work was the rethinking of art as a whole. I traveled a lot, met many personalities and saw with my own eyes many wonders of architecture.
My world turned upside down and the end of this path, I realized what art is for me - the beauty of human nature. After all, wherever I was, people who spoke different languages lived in different countries, differed in their features- and were so similar to each other, regardless of their differences. They loved, worked, laughed and cried. In each of them was this spark of human nature. That is what you can see on my canvases, in every movement with a brush.
1999 graduated from the Kiev Academy of Arts.
In 2015, she created ASPAR-ART, and to this day I am the director, inspirer and artist of this company. Aspar-art creates amazing panels and furniture using mosaics. It also creates mosaic wall decor.
-She participated in various exhibitions both separately and jointly with Aspar-Art.
-Annual exhibitions in Kiev.
-When the opportunity arose, she began to take part in European exhibitions, both separately and jointly with Aspar-Art.
-At Art Week in Italy, together with Russian artists in 2017.
-In Poland, together with Aspar-Art in Poznan.
-In France, together with Aspar-Art in San Rafael in 2018 and in Paris in 2019.

The Painting made with oil paints on canvas. Size (90x110 cm). In Frame.
rom time immemorial we have been attracted by contrasts. The eternal theme is day and night, yin and yang, good and evil, life and death. We love life, but we are afraid of death. We adore light and avoid darkness. But we forget that one is an inevitable continuation of the other. Eternal cycles of birth and death, sunrise and sunset. The canvas depicts two women, one symbolizes the day and the other night. But what's the real difference? Two perfect women. One light and another shadow. The painting is done in a classical style. It will decorate any classic interior. Will look good in Art Deco style. And it will become a bright accent of such styles as minimalism and modern.

The Paintihg made with Oil on Canvas.Size 90x105. No Frame.
Lachesis and her sisters (Atropos and Clotho) were the daughters of Erebus (Darkness) and Nyx (Night), they are said to have been born of Zeus and Themis.
Lachesis was the apportioner, deciding how much time for life was to be allowed for each person or being. She measured the thread of life with her rod. She is also said to choose a person's destiny after a thread was measured. In mythology, it is said that she appears with her sisters within three days of a baby's birth to decide its fate.

The Painting made with oil paints on canvas. Size 90x105 cm. No Frame.
Esoteric oil painting - an ancient Greek myth about the three sisters of time. The first sister spun the thread of life. The second sister weighed human actions. The third sister has passed the thread of life. The painting depicts the first sister, myra Koloto. The first part of the general triptych.

Painting made with oil paints on canvas. Size 90x105 cm. No Frame.

The painting is made with oil paints on canvas. Size 140x100 cm. Unframed.
he painting depicts a bearer that transports souls to the afterlife. The pale soul obediently sits on the black horse of death and waits to be received. Death is usually depicted as an old woman with a scythe. In Greek mythology, it is Charon who takes the soul to the afterlife. I disagree with that. I think everyone will be given according to his faith. If you believe in an old woman with a scythe, she is your guide. If you believe in Charon, Charon will be waiting for you. The idea for this painting came during a trip to Europe, namely in France in the tourist town of Carcassonne. From a distance, it looks like an impregnable fortress, another dimension, something mysterious and inaccessible. In the background, the towers of Carcassonne are shown. As a symbol of the afterlife. The painting is done in a classical manner. It will decorate any classic interior. Will organically fit into Art Deco. and will serve as a bright accent in such modern trends as modern and minimalism.

The painting is made with oil paints on canvas. Size 60x80 cm. Unframed.
The painting depicts the Greek myth of the first woman, Pandora. The gods created it specifically to punish people for the fact that Prometheus gave people fire. Each god has endowed Pandora with something special. Aphrodite gave beauty, Grmes - a cunning mind, Athena - a brilliant dress. The gods gave Pandora a chest. When Pandora opened the chest, sickness, war, and misfortune spread out. Pandora got scared and slammed the box, not suspecting that there was hope at the bottom. This drawing really symbolizes not the opportunity to correct what was done, but the experiences and torments in connection with this. There are things and events that are irreversible. The painting is done in a classical style and will fit well into any interior, both modern and classic.