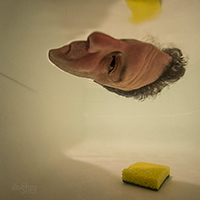 Alex Sher is an award-winning American underwater fine art photographer whose admiration of feminine sensuality heralded him to worldwide acclaim.
Sher was born in Ukraine in 1962 and started taking photographs at the age of twelve. He graduated from Kyiv University in 1984. Two years later, he volunteered as medical personnel to the Chernobyl nuclear disaster recovery. When asked about that time, he says "having no clue how much radiation you are getting makes you appreciate every breath - pretty much what you feel underwater."
Alex Sher started showing his photographs in the early nineties; however, he considered himself an amateur artist until his work was stolen from an exhibition in Kyiv.
Sher immigrated to the US with his family in 1995 and currently resides in Los Angeles. As a former biologist and an ocean diver, Alex is deeply concerned with the decimation of kelp forests along the California Pacific Coast.
Sher’s underwater photographs emerged in 2011. In 2015, after participating in a photo competition, his works were exhibited in Paris at the Louvre Museum and later by museums of London, New York, Chicago, Los Angeles, San Francisco, and other major cities. Sher's first solo exhibition was held in 2016 in Los Angeles by the Bruce Lurie Gallery. Since then, he has had six exclusive exhibitions, has been in numerous group exhibitions, and has participated in major US art fairs.
Sher's artistic style is marked by the transition from photographing marine wildlife at the very beginning, to then figurative nudity, with a majority of monochrome black and white works. His most recent pieces showcase minimalism and abstraction with bright colors through a quiet, eye-catchy, and charming combination of figurative and abstract art.
Sher is an excellent underwater coach who trains his models on how to control their breath and buoyancy, as well as their feelings. He also teaches spiritual blending with the water and modeling technics for different underwater cameras.
Alex Sher generously shares his artistic and technical innovations. His ideas inspire underwater photographers around the world.
Sher's first photo book 'Mermaids' was published in 2018.
Alex Sher is being represented by the Touchon Gallery since 2019.