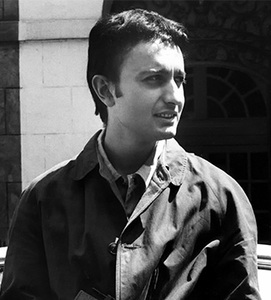 Vic Singh
Vic was born in India, son of a Raja a keen amateur photographer, his mother owned a photographic studio in Vienna and then in London. In the early 1960's he studied at St Martin's College of Art in London and was influenced by French post-impressionists like Van Gogh and Cézanne. After St Martin's he started as a young photographer in Studio Five located in London's Mayfair, where he worked alongside John Cole, Norman Eales, David Bailey, Frank Sweeney and Tony Stone.

Later he established his own studio in Bourdon Place, London W.1. His work focused on the demands of fashion magazines, such as Vogue and Tatler and the requirements of advertising and the pop music industries. He was at the 1960's center of the vibrant music scene, working with Island Records, Pink Floyd on the iconic album cover The Piper at the Gates of Dawn and The Beatles on Sargent Peppers Lonely Heart's Club Band. In the 1960s and 1990s he worked with models, such as Twiggie and Kate Moss.

In the Swinging Sixties of London he was a pioneer of photography as a fine art form. Subjects included portraits, landscape, still-life, abstracts and the female figure as a sublime form of expression. Photographing in black and white, manipulating prints in the darkroom and then hand colouring with various paints, inks, and dyes. A technique that produced quite unusual results and he says "gave him the ability to express his creativity away from commercial demands”. At this time photography was not widely accepted and even ridiculed as a serious art form. In recent years photographs have been taken more seriously by collectors of art, galleries and museums. Although the old darkroom techniques have never lost their charm for Vic, the digital age has arrived and he continues to experiment, fusing analog and digital technology to produce unique and collectible works of art.

Based in London Vic's work has exhibited at: