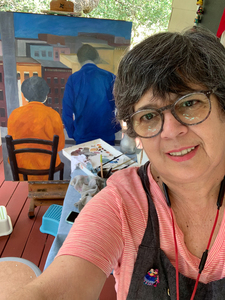 I hail from Cali, Colombia. Upon arriving in New
York City in the late 1990s, I decided to change
my life from an environmental engineer to that of
an artist. I am an admirer of beauty, nature and
the enchantment of the vivid colors that embraced
my childhood and my youth. My paintings are a
a visual narrative of moments of life and love;
sometimes based on reality, sometimes derived
from my imagination, or a combination of both.
They reflect my love for everyday objects and the
beauty of the ordinary. I paint what I love and
what I am.

THE MAGICAL WORLD OF DELANTAL

I dived into the magical world of DELANTAL attracted by its feminine design, functionality, and its history. The apron has lived for thousands of years, mainly reflecting the political, social, and cultural climate of a period, adapting and remaining without changing their nature. DELANTAL—Apron. I think the apron is a symbol of women’s generosity and dedication to work. That is why in this series, DELANTAL —Apron: The Jobs, Patterns, Colors, and The Stories Behind Them, I want to exalt and convey the vital role this garment has played in women’s life. Its magic invited me to represent in these 18 works of art the aprons that, for some reason, touched my feelings the most. Lectures and thousand photos served as inspiration, as well as aprons of dear friends with their stories. Surely, we all have an account. Now I leave you to refresh your memories and enjoy the “DELANTAL.”

Today, aprons are back in a big way, with the increased popularity of cooking and the back-to-the-kitchen movement. Fashionable boutiques offer handsomely made aprons created from different attractive and often unusual fabrics with whimsical decorations and a new generation has discovered the necessity and utility of aprons.
This brings me to a modern Colombian orchard, with trees and shrubs of fruits like oranges, bananas, papayas, guavas, and lots of other tropical fruits.

There have always been many trades that have used the apron as a work uniform: waiters, baristas, cooks, nurses, domestic workers, hairdressers, shoemakers, florists and many more jobs. By in the 1980s, working women spent less time in the kitchen and new apron fashions were not present in stores. In the 21st century the apron began to be used inside and outside the kitchen, but it has been completely renovated. Today, aprons are a sign of identity of each trade and the image of the job.
The Garden party apron is simple and invites us to garden all day, with pretty paths, flowers, and happiness.

In the time when aprons were beloved, there was a cute style with the top half of the body fully covered, but only part of the skirt covered, called the Cobbler apron. It looked like a dress bodice with side ties that brought in the wasp waist. Two or three large pockets lined the front to hold a lot of items, especially useful on laundry day and to carry cleaning products or garden gloves and small hand tools. The Cobbler apron was not intended for public display. It was designed as a practical apron most useful for moving quickly from one cleaning task to the next.
As a former engineer, I love the term "Domestic Engineer," ironically introduced just as society began to place less importance on the homemaker's role. A "Domestic Engineer" can carry out anything from cleaning to doing everyday jobs for the family.

The Beautiful & The Sublime

In these still life paintings, I see the world differently, from countless angles, each different, unique, and always important. They are beautiful without being sublime, and yet they can be sublime without being beautiful. These paintings are an expression of everyday life, an exaltation of the beauty of the combination of geometric forms. My interest is not in the objects themselves but in using them to experiment with shape, color, and lighting.

"ENJOYMENT," 40 x 30 inches, acrylic. The inspiration for this painting comes from the memory of my father who every morning had his coffee while reading the newspaper, and how he always enjoyed it. So much that if we called him at that moment, he wouldn't want to talk.

"LOVE" acrylic on canvas 40 x 30 inches I painted last year. In this still life painting, I see the world differently, from countless angles, each different, unique and always important. They are beautiful without being sublime, and yet they can be sublime without being beautiful. These paintings are an expression of everyday life; an exaltation of the beauty of the combination of geometric forms. My interest is not in the objects themselves but in using them to experiment with shape, color, and lighting.

"Contentment”, acrylic, 36 x 40 inches. This painting is an expression of satisfaction and confidence that surrounds my life, and an exaltation of the beauty of the combination of geometric forms and colors. My interest is not in the objects themselves but in using them to experiment with shape, color, and lighting.