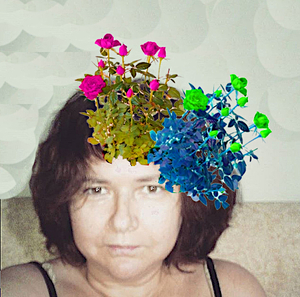 Born in São Paulo, Sp, Brazil on January 29, 1974. Daughter of an architect father and grandfather, of the family of Frei Antônio de Santana Galvão, first Brazilian saint. The graphic designer and artist Juliana Oléa de Souza e Silva, keeps real pearls in her artistic career. She participated in two exhibitions, one at the first painting festival of unesp, in the capital of São Paulo and another at the gallery Eixo, with the work foliage. She has already ventured, and continues to venture into digital art, photography and painting to express herself.

She lived for many years, giving importance to her production, to the act of making, having divulged her work very little. There is a lot of material to take out of the drawer and many projects in progress and under development. In fact it continues to do all the projects a little bit.

In the mid-2000s, she began drawing garlic from pens in calico, distorted hands with half-blind drawings, and making paintings with acrylic enamel.

As of 2008, she began to photograph, having done series of works from a moving taxi, which resulted in photographs with sensations of movement of lights, giving a special glow and reflections to the captured scenes. That are also seen in her night series, where she made records in night clubs in the capital. When she became interested in photographing the lights and ornaments during the Christmas season, having made beautiful records in several places and malls in the capital of São Paulo. In 2014,she decided to travel to the interior of the state of São Paulo, taking her camera and recording landscapes of the roundtrip, the sky and other landscapes. she went and came back many times. She continued and likes to keep records in the capital, where she lives. Always from inside a moving car. But now, without emphasizing the movement, but the spatial registration of places. Intending to expand to other cities, take this project forward and expose what has been done so far. She seeks sponsorship for this and other projects.

In 2015 she started a series of digital works that portrayed and still portrays the country's political moment and also emphasizes issues such as the environment and water scarcity. Always concerned with nature, she decided to continue with issues involving concern for the environment, making paintings that mix natural elements and the constructiveness and expansion of things.

It is now involved in projects that address environmental, fauna, flora and living things. The common ground, where different forms of life transit and inhabit. It is up to us to give value, take care, alert and preserve it for the next generations.

These works are part of the round fauna series, where I make paintings of elements of nature, as flowers, animals, man, Jesus, Our Ladies, Saints and angels and the sky, so important for the survival of the environment.

A request to our creator, the supreme God, all saints and angels, our lady and mother nature and their animals and beings, for more respect, love the naturalness of things and the environment. for the preservation of species.

i emphasize elements of nature, as flowers, plants and animals.

They're portraits of pieces of the sky. Bringing good energy and protection. Emphasizing the divine. I can do the work only with heaven and clouds and also with the image of Jesus, Saints, Angels and Our Ladies. The works are unique, different from each other. Get yours now!

Portrait the animals, naturally in the environment, pray alone, together, or with elements of natural flora, flowers, leaves and fruits. Emphasizing nature.

Portrait the animals, naturally in the environment, pray alone, or together, with elements of natural flora, flowers, leaves and fruits. Emphasizing nature.