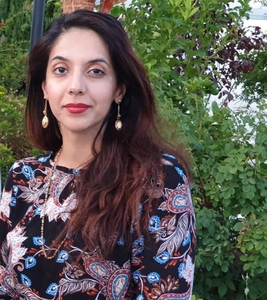 Taskin was raised in Nairobi, Kenya, and has been painting since she can remember. After graduating, Taskin has participated in World Citizen Artists (WCA) Group and United Nations Environmental Art initiatives such as ‘Art for Environment Project’ showcasing paintings by artists representing environmental themes such as deforestation, water and plant conservation. She was one of the award winners for WCA Peace Competition of 2016 and previous to that received training from an American based Fine Art Company - Artists Network F & W Media Inc.
Growing up in a place like Africa, a land full of colour, vast open landscape and scenic coastal areas has certainly contributed to her deep passion. These experiences added to her love for colours, nature and the nature world around her which continues to serve as subjects and backgrounds to many of her compositions. Some of her artwork are observational and inspired by places she visited. Taskin works mainly across oil medium however in the past she has worked with acrylic, mixed media and pen/ink. Her artworks range from city landscapes and seascapes to striking semi-abstracts.
Taskin has always believed that there is always space for expression and through expression real moments are captured and memories are made. This idea was the birth of Brush and Strokes Art Studio. Her own art studio based in Kileleshwa, Nairobi which she formed in 2013 after she moved back to her home country Kenya from U.K. From her studio, Taskin creates paintings that she has been selling through solo and group exhibitions, collaborating with Kenyan Artists and Artists from around the world.
She derives her inspiration to draw and paint from everyday life and the beauty, diversity and grace of nature around her particularly those natural subjects that play with light for example, flowers, trees, sky and water. In her own words ‘the effect of light on natural objects and changing colours as the day unfolds fascinates me’. In her own words, ‘I truly feel that there is something beautiful in every piece of the natural world. I am inspired by nature, fascinated by what I see around me and aim to depict this through my work so those others too can experience the beauty that surrounds them’.
She regularly applies impasto to her work as she believes it adds texture and depth. Her technique involves occasionally using the palette knife. She conveys her ideas with textured and vibrant paintings that burst with energy and are a reflection of her joie de vivre ‘vivacious’ spirit and purity of expression. Her landscapes express her outer worldly experiences while her abstract work reveals her inner intuitive experiences.
Taskin is currently represented by Xanadu Gallery, Arizona, U.S.A. and believes learning in art is a limitless journey with never ending possibilities. She aims to continue to grow in her artistic journey and make someone smile or moved emotionally through her work. When Taskin is not painting in her studio, she is connect meeting other artists and visiting new places. She loves decorating, swimming and also travelling.

Seascape Painting from imagination of a ship sailing in the ocean - a reminder of exploring new possibilities and using our deepest innate awareness and intuition to guide us on our journey of life. 'Unexplored territories have no maps, yet the intrepid explorer is guided only by his inner compass to new adventures and discoveries, moving with the winds wherever it takes her'.

Landscape painting of vast open lake , waterfall and mountains in background - a reminder of the beauty and serenity of nature and the natural world around us.

Where flowers bloom, there is hope. Hope for a better future. During uncertain times, hope is alive. All of life is filled with many shades of colours, some dark and some bright, and if we took some time to stop and absorb the beauty that in within every moment we remain hopeful and believe in the infinite possibilities that life has in offering.

Front view landscape of Badshahi Mosque / Emperors Mosque (Punjabi: بادشاہی مسجد, lit. 'The Royal Mosque'), painted from observation. It is a Mughal-era congregational mosque in Lahore, capital of Punjab province, Pakistan, located west of Lahore Fort along the outskirts of the Walled City of Lahore, considered one of Lahore's most iconic landmarks and sights. It was constructed by the Mughal emperor Aurangzeb between 1671 and 1673, a symbol of Mughal architecture (and the largest mosque of this era), with an exterior that is decorated with carved red sandstone with marble inlay.

Home on a Hill overlooking the Lake

“Home on a Hill Overlooking the Lake ”

Landscape painting from imagination of a serene holiday home overlooking a lake.

Colours of a New Beginning

“Colours of a New Beginning”

landscape painting inspired by the hope for a new beginning and a renewed aspiration for the future.