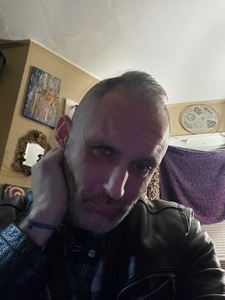 I was born in the city of Cleveland Ohio with the constellation of Scorpio on the Eastern horizon and the Sun in the constellation of Leo. I lived in one suburb or another on the west side for my formative years. At the age of three I lost the sight in my left eye in a simple accident. Being so young i adapted well and can certainly see in three dimensions very clearly. It is somewhat of an irony that I favored the visual arts, however I question whether the universe exists but for the sake of irony...

I was formally trained in commercial advertising during high school and at the age of seventeen received a vocational diploma in graphic design.

I moved to Orlando Florida to pursue music my other passion, and at the age of eighteen attended university at Full Sail for record engineering. Halfway through I switched my major to Digital Media and was amongst the first generation to have a degree from a accredited university in digital media in the year two thousand and two.

I moved back to Cleveland after graduation, became a painter