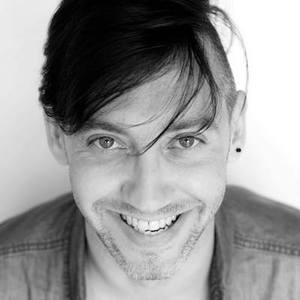 The journey of Nikolay Vlahov started in 1983, when he was born in a small town in Bulgaria, South-Eastern Europe. He discovered his passion for drawing and writing while creating comics in his early childhood. Building these dream-worlds was his initiation as an artist. Along his creative path, his self-expression has been channelled through a great variety of art forms.
His thirst for capturing the beauty of the present moment found its expression in photography. Nikolay graduated the School of Photography at the National Academy of Theatre and Film Art in Bulgaria in 2012 and won numerous awards for his works. During this fruitful creative period, he discovered another of his passions – stage and costume design. He was further invited to create the stage design and costumes for various theatre plays and dance performances.
His artistic aspiration brought him to Berlin, where he participated in numerous workshops and exhibitions.
Nikolay’s curiosity about the creative expression of different cultures led him to the country of the never-ending-summer – Indonesia. In the exotic environment of University of Arts Indonesia in Yogyakarta, the county’s artistic capital, he discovered and fell in love with the ancient art form of batik. There Nikolay dedicated a year of his creative journey to master his skills of this fabric design craft. He has created a series of hand-crafted scarves inspired by the breath-taking nature of Indonesia, the genuine batik symbols and his own philosophy of life.
In 2016, Nikolay Vlahov was invited to participate in the Ketuk Roso International art exhibition at Raos Gallery Batu, Indonesia. His works represent the magical fusion of the traditional Javanese batik technique and contemporary methods of intuitive painting.
In 2020, he was one of the 30 selected artists from all over the world whose works were included in a curated online art exhibition called United Through Art organised by Artios Gallery, New York. In the same year, Nikolay Vlahov was one of the 70 selected artists from 500 participants from all over the world in the first international online exhibition hosted by Galleri SoHo, Västerås, Sweden. Besides, he was three times one of the selected feature artists published in Apero monthly fine art catalogue for established and emerging artists (issues: September 2020, January 2021 and February 2021).
EARTH was the most recent international exhibition Nikolay Vlahov has been selected to participate in. He had applied with a series of photographs called WE ARE NATURE.
Currently he lives and works in the capital of Bulgaria – Sofia.