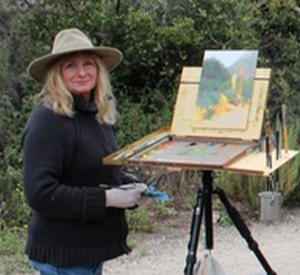 My life as a painter has been unconventional and has led me to some interesting places. It has given me an opportunity to meet some wonderful people that have shaped who I am today. I continue the journey of finding my voice within and know with each painting the voice gets louder.

Painting started for me at the age of nine with a paint by number clown picture I got from trading in my mother’s S&H Greenstamp books. It was amazing to me how simple shapes and colors created an image.

I continued painting and discovered I had a voice in me, but couldn’t hear it. In 1969, I won a scholarship to attend the Upper Merion Cultural Center in King of Prussia, Pennsylvania. After graduating from high school in 1970, I attended the Atlanta School of Art for a couple of years. I became discouraged that I was not finding a way to reach the voice that compelled me to paint. I decided to move out on my own and pursue my painting alone. In 1972, I met Larry Brooks of Brooks 64 Gallery in Birmingham, Alabama. He showed my work until I moved back to Atlanta, Georgia in 1977, where I became affliated with Barclay Gallery.

In 1976, I was introduced to a Hungarian art collector from Quito Ecuador. He arranged a one-woman show for me at Galeria Artes in Quito. Upon returning from Ecuador, I moved to Laguna Beach, California.

I took various classes at the Laguna Beach School of Art and participated in the Festival of Arts, exhibiting various limited edition etchings, lithographs, drawings and paintings. Some of my pieces were shown at L’Orangerie Gallery in Laguna. In 1980, I had a one-woman show at the Spurgeon Room in the Santa Ana Library. A one woman show was held at the Greenhouse Gallery in Laguna Beach in 1981.

Still feeling compelled to find that voice in me, I moved from the paradise of Laguna Beach to a loft in the garment district of downtown Los Angeles, in 1983. With the direction of David Allgood of Mind’s Eye Studio, I began doing limited edition serigraphs, handmade paper and commissioned art for public spaces around the country. My paintings became wall size and I found a bigger than life experience in painting that large. Landscapes became a common theme.

In 1991, my work was accepted at the Sales and Rental Gallery at the Los Angeles County Museum of Art.

For the past twenty six years, I have maintained my own studio in Los Angeles and have pursued the landscape as a major source of inspiration. Plein air painting is now a source of my education and expression. I still search for that voice in me and think I am getting closer to it with every painting.

30' x 40" oil on canvas. This painting was inspired by reflections in my pond.