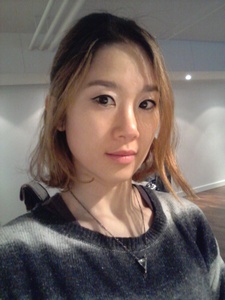 Lacey Kim was born and grew up in South Korea. After graduating from Seoul Women’s University with a Bachelors in Fine Arts (2003), she pursued an international education, completing an MA at Nottingham Trent University in the UK (2007), and an MFA from the Pratt Institute in New York (2009). Kim’s work has been exhibited globally in cities like New York, Chicago, Vienna, Miami and Seoul, and she has lived and worked on three continents. Her non-representational style has attracted attention from critics and galleries worldwide. Today Kim is based in New York.

Kim’s work is expressed through lines. It distances itself from the actual world. The "Line," among other forms, has been a means and messenger of expressing "being free". It has various forms, sometimes curved, other times straight. In addition, it shows a feeling of being sometimes slow and sometimes very fast. Kim wants to express and feel with viewers something that exists not just in one field, but can engender the infiniteness of the world through the language of lines.

My work is expressed through lines, which are a means of expressing my freedom. Sometimes curved, other times straight, the line represents something that exists not just in one field, but throughout infinite experience. I believe the deep spatial effect created by various layers urges the viewer’s senses to transcend the two-dimensional world of painting. Colorful lines meet one another freely and create unexpected forms. When working, I follow the flow of my unconscious mind. The harmony of opposites - real and relative, free flowing and driven by rules - is what my paintings express.