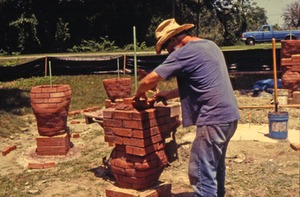 My work in general creates organic representations of the built environment, and as is evidenced in the visual material, contemporary, but with firm roots in the past. Because of the associations we all bring to the iconic Brick, it can be a good vehicle for metaphor in a way that other media are not, especially in an urban setting. If an interactive, organic brick sculpture is created it can imbue the urban environment with a human element, in a very real sense.
Functional and semi-functional elements are an integral part of my sculpture, I don’t view them as an impediment to the artistic form, rather they drive it to become more when human involvement takes place.
Although now based in the Philadelphia area, I have completed commissions both nationally and internationally. All were completed on schedule and within budget and all have withstood the various types of harsh weather conditions.

Tower, 36'x14' diameter. Building growing out of the ground in country estate. Entrance to barn at 12', observation deck at top. Nashville NE 2005.