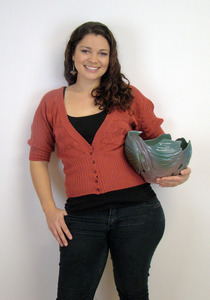 Danica Wichtermann is an emerging contemporary ceramic artist and also a sculpture, art and ceramic teacher, who lives and works in Perth WA. She received her Diploma of Education (Secondary, 2009) and Bachelor of Arts (2008) at Curtin University WA, and has also completed a Cert IV in Visual Arts at Fremantle Tafe WA (2005).
Danica’s passion is working on the potter’s wheel and exploring the limits of clay. She creates handmade vessels, sculptural works and functional ware, which all explore the notion of ‘rediscovering ceramics.’

Her work is inspired by the Western Australian bush, flora, sea and landscapes; specifically their unseen or hidden beauty. Each piece goes on its own journey, reflecting colour, form and feeling. They are created to be explored, to draw you into their own internal worlds, to be discovered and unveiled.

Danica has exhibited in many group exhibitions around WA, has won awards for her work and is currently represented by the Barracuda Studio Gallery in Fremantle; Bunbury Regional Art Galleries in Bunbury; Happs Pottery in Dunsborough and the Zig Zag Cultural Centre Gift Shop in Kalamunda.
Danica is currently working towards a solo exhibition and expanding her ceramic business nationally as well as internationally.

These organic vessels take on the forms of the Western Australian land and botanical life, reflecting colour, form and feeling. They are there to be explored, to draw you into their own internal worlds, to be discovered and unveiled.

These pieces were created by first throwing a double walled symmetrical vessel. The piece is thrown in one go on the wheel and I then work on each layer to thin it out and give it form. I then alter each layer/wall using my fingers, sponges or a tool, to transform the shape, adding movement to give it a more sculptural look.

Once leather hard, the piece is carved and refined before I spray on different coloured under-glazes. The works are then fired and re-sprayed and glazed before its final firing.

Double Thrown- Stoneware Blossom.
Purchased by Mayor Logan Howlett at the Show Off 7 Exhibition, May 2011

These pieces were created on the wheel, thrown as a symmetrical form and then altered and carved into. They were particularly inspired by my recent journey up through the Pilbara region of Western Australia to Karijini National Park.

The works were carved on the outside reflecting patterns and textures I saw and experienced within the rock gorges. The surface is further enhanced through spraying on different tones and colours of under-glazes and glazes, highlighting parts and also adding shadows. I chose contrasting colours to represent my own experiences of the lush greenery or the bright blues of the rock pools and sky- against the warm reds and earthy colours of the surrounding stone walls.

Each piece is an individual expression of nature; of self. The intent is not to replicate objects, but to simply translate something seen, or experienced in a unique and interesting way.