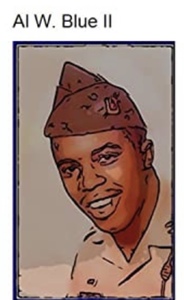 About the Author and Photographer Al W. Blue II. Coming from an African American and Seminole Indian heritage. Al has published MORE THAN 20 BOOKS. INCLUDING; African Americans on Album Covers, Race Records and the Poster's of the Era, Race Records and The African American Men who made them Famous, African Americans & Sheet Music Covers an Odd love Affair,Buffalo Soldiers,Indians and Black Cowboys,Book of Strange Medical Oddities,Gods and Goddess You might not know, Sleazy Magazine and Book Covers Volumes 1-3, Who Makes this Stuff Up?, Book of Strange Facts Volumes 1-3, Street Art volumes 1-3, African Americans on historical posters and Race records and the Women who made them Famous. Just to name a Few. Al's latest BOOK. STRANGE TORTURE AND KILLING DEVICES. IS THE AUTHOR'S 30TH BOOK. Born in Pompano Beach Florida and raised in Brooklyn New York. Al attended Pratt Institute and The Art Institute of Fort Lauderdale. AL was also the recipient of a youth grant for the Arts. From The Brooklyn Museum. His first book, Culture Shock was published by a small publishing company in 1981. He has worked on many film and video productions over the course of his life. Including: Stage Manager for both the National Black Arts Festival and The Montreux Jazz Festival. Working with Russell Simmons at the very beginning of Def Jam and Rush Management. AL was also briefly Involved with Vernon Reid and The Black Rock Coalition. Asked by his friend, Scott La Rock to be involved in the filming of his first major video. Al was the 1st AD for the acclaimed music video: My Philosophy. Directed By El Dezo. Al was also the Audio 2 for The Monique Show. Currently residing in Atlanta Georgia, Al still keeps a small apartment in New York City on the Lower Eastside. He also owns a small Film and Sound Production company. Director and Producer of two TV Shows. Rap Television and The Notorious M.I.C. T V Show. Short for Musicians International Collective. The show is still on the air and can be viewed on YouTube @ ALBLUEFILMS any day of the week. Al has lived abroad on several occasions, these trips Included: Paris,France, Spain, Germany, Morocco and many other parts of Africa. Currently working on several film scripts. Still traveling around the World and continually writing new books every year.