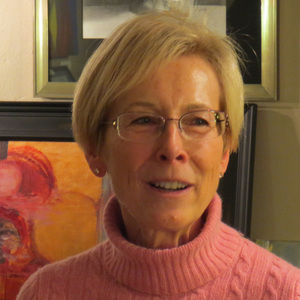 Vera Gierke is an artist who grew up in New Jersey, and has lived in Michigan, Indiana and Rhode Island, and seasonally on Nantucket. Living in Rhode Island, she engaged in a broad range of Continuing Education classes at Rhode Island School of Design and worked with a few local artists. From having taken a large variety of classes, Vera expanded her vision and found that the various areas of art interrelate, support and broaden each other. Aspects learned in one discipline have enhanced were incorporated into other forms of art. With her developing interest in art, she joined the Providence Art Club where she explored a variety of art classes: acrylic, oil, watercolor, drawing, print making, photography, photoshop and collage. Through these classes, Vera discovered a fascination with paper collage and has made that her favorite form of art. Her work is not abstract, rather she looks for a way to make an image or object different than what is expected, to add interest through the material used for the collage, and to entice the viewer to look at the work more carefully and mindfully.

In speaking about her collages, Vera calls them A Fanciful View of a Realistic Object.
She describes them as more than what initially meets the eye.
“Something catches my eye, a scene, an image, a photo, and I begin to transform it in my mind into a collage, imagining how I would design the new work, what I would want to incorporate into it, and what I want the new art to express. The collage is made of pieces of paper, chosen not only for color and interest, but also for the relevance and comment that it brings to the collage subject itself. I love taking one form of printed material and converting it into an entirely new image. “
Vera wants her art to be appreciated up close just as much as from a distance. From a distance, the collages create a charming or interesting picture, but there’s more to it when fully appreciated up close, when the viewer sees what varied material she has employed to create the whole collage. She invites the viewer in for a closer look, whereupon he sees how the pieces of paper relate to the collage and the subject of the art.
“I want the viewer to continue to explore, to discover more in the collage. The art is intended to be viewed and appreciated up close as much as from a distance.”

The collages that I create are not abstract, rather they are using specifically selected pieces of paper to create a recognizable image.

“Walk A Mile In Her Shoes”

This artwork evolved from an event with the same name which brings awareness to domestic violence. From photos I took at this event, I created this collage. The shoes and blue leg warmers are worn by a man.

Using photos from times spent waiting in a New York subway I created several subway collages. The focus of this collage is to show the separateness and isolation that is common in the city, while many are on their cell phones.

Using photos from times spent waiting in a New York subway I created several subway collages. The focus of this collage is to show the separateness and isolation that is common in the city, while many are on their cell phones.

During a recent trip to Cuba, I was fascinated by the convertibles, the well-maintained classic cars from many decades ago that we rarely see in the US. From one of my photos, I fashioned this collage to demonstrate the lively color and enthusiasm of a convertible, while also showing the typically crowded bus, and the attentiveness to one’s cell phone. While the internet connection in Cuba is sparse compared to ours, the young people are always trying to be connected.

Watching people's feet as they walked along the beach made for interesting subject matter for my collages. This is part of a series.