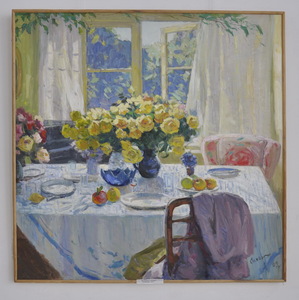 Vladimir Samokhin was born in 1938. In 1957 he was graduated from the Moscow School of Painting with honors, in 1965 from Kyiv State Institute of Arts, diploma work was "Portrait of Chief Designer O. K. Antonov ". The teachers of Vladimir are professors Shtilman, Chychkan, Trokhymenko, Zabashta.
Creative career began in 1965. His creative achievements: а membership of the realistic school of art in Ukraine, regional, national and international exhibitions and auctions of art. He worked as an artist-painter in the "Artist" of Ukrainian Art Fund, performing creative orders. He is member of the National Union of Artists of Ukraine since 1974. Artist’s works are located in eight State Art Museums of Ukraine, in private collections in The Ukraine and abroad. Artist takes part in more than 70 exhibitions: ukrainian, international, regional. He also participates in international art auctions: in France, Germany and Italy. In July 2004 the Central House of Artists took part at personal exhibition of Vladimir Samokhin, that had a great response in the art society of Ukraine and had been broadcasted on television. He is a professor of the IACSS (International Academy of Computer Sciences and Systems) since 2008.
Major art works:
1. "Portrait of The Chief Designer O. Antonov", 1965 - Antonov museum ASTC, Kyiv.
2. "Portrait of the N. Kurchenko" State Museum, Zhitomir
3. "During the war years," Art museum, Sumy
4. "After a long campaign," State Museum, L’viv
5. "Meteorologists", State Museum, Chernigov
6. "The roads of emigration", State Museum, Chernigov
7. "Secretary", State Museum, Uzhgorod
Vladimir Samokhin continues to work in the genres such us: genre paintings, landscape and still life.
Website: www.v-samokhin.com

“"Quiet evening over the Dnieper" ”