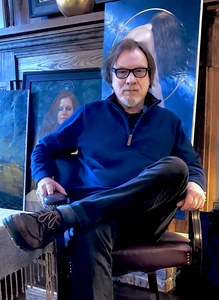 I have always used art to engage the viewer in a more comprehensive dialog than the purely visual. I use the image to draw the person into an inner discussion with the painting. Some of the comments I have heard offer surprising insight of my work and the viewers inner thoughts about it.
I believe that people enjoy this engagement and quickly move past the realistic vehicle to the that inherent content it carries.
When ever possible, I have quietly listened as viewers discussed what I meant to express. Sometimes they express the idea I had in mind but more often, it’s a story unique to them and inevitably, just as relevant to the work.
As artists, I believe every major work in art history achieved that status by using the image as a vehicle to express an intellectual, emotional or moral human value or idea. This is the imperative of all great art weather realistic or pure abstraction. (All art is abstract as it is paint on a two dimensional surface.)
I was taught how to use my talent and the tools of design, color and the act of marking. Learning to accept my need to include messaging within the image was always present. A successful work for me, is one in which the image causes one to stop and ask; What is it saying?
That is the goal of a successful work. That is the true mission of an artist.

These are a few of my recent works.

Figurative painting of model in white with floral crown.

Medusa-oil on linen, 24x36”.
Medusa was a beautiful maid, according to Ovid, who while worshiping in the temple of Minerva/Athena was raped by Neptune/Poseidon. Athena became enraged and cursed her by turning her beautiful hair into her gaze into petrifying effect of any who stared into it. Medusa and her Sisters lived and died on the island of Sarpedon. All who died under her gaze had to travel there with the goal of killing her. Perseus was given a special shield by Athena which enabled him to kill her without looking directly into her eyes. This Athena got final revenge. Maybe the first case of rape shaming in history.

“The Death of Innocence”

Oil on panel, 36x24” depiction of the loss of the innocent wherever it occurred.

Refuge- Oil and gold metallic on panel, 36x60”
Young girl is standing next to a stag in a forest clearing. Her dress is tattered and wrinkled. She seems lost but the penetrating gaze of her eyes and the strong presence of the deer behind her indicates a feeling of defiance and an escape from desperation to a place of safety; a refuge. This painting is the result of the constant incidences of child exploitation that occurs daily. Trafficking, murder, slavery and abuse are intolerable and this painting is my effort to have some small positive effect on it.