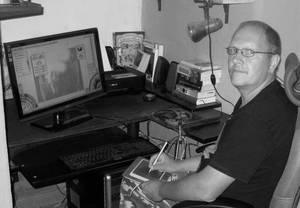 Born in 1961, married, two dogs ...
Live in the countryside in an old house with a large garden, in Saar triangle.

Through my passion for reading which is mainly since the mid-seventies of the science fiction, fantasy and fantasy are many of my Bidler from these areas.
Initially, there were "only" images for the eZine Terracom or Dorgonserie this changed abruptly.

From 2006, my contacts with the German SF and fantasy scene was intense partly due to the acquisition of the Editorial Board of Terracom ezines.
Many of the permanent staff jumped down and I was forced to raise other material. So I got more and more interesting people with the scene
into contact.

In the SF network I came through a cover for the Andromeda messages in contact with Michael Haitel, p.machinery his activities during SFCD and its publisher,
thus resulting in some of my pictures.
Shortly after I joined the SFCD (Science Fiction Club Germany). So I'm doing my due Terracom SFCD contacts and gradually cover and Innenillus for various eZine, magazines and books semiproffesionelle. E.G. Exodus Quarber Mercury, twilight, XUN and many others.

I will not settle for a style even if the recognition is thus perhaps lost.
But the surreal and the style vision kind irritate me but increasingly. Steampunk not to forget ...

I hope to prepare well to the viewer fun or horror looking at my pictures.

My sites can be found at: http://www.saargau-arts.de