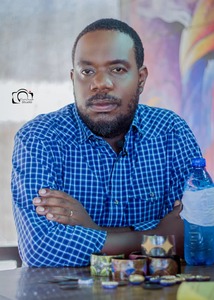 is a well-known artist who lives in Port-au-Prince, Haiti. Even as a child Dukeson had a significant amount of imagination and creativity and, at the age of twelve, enrolled in an art school to study sculpting. Upon graduation from high school, Dukenson went on to further his studies and attended ENARTS, a national art school in Port-au-Prince. He now paints in various fine art styles including realism, surrealism as well as abstract painting. His mediums include acrylic, oil and water color. Dukenson has participated in various exhibitions and has sold his paintings in both Haiti and the United States.

Dukenson Pierre has an amazing amount of passion and experience for both creating and teaching art especially to children. He often talks about how much he is inspired by the children's developing abilities. His experience includes teaching young people in orphanages and schools. Between 2006 and 2008 Dukenson taught art to children living in the streets and was interviewed for a documentary about that program by the United Nations. He also worked in a project for people who had become disabled by the January, 2010 earthquake in Haiti to help with their rehabilitation. His work was featured in a broadcast by the media from Mexico.

Dukenson's work is available for both preview and purchase.

To show the purest of countryside