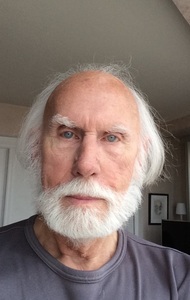 . From 1970 until 1980 he works as designer for festivals, made covers of books, created lithos for OCE Belgium , for Volvo Cars Sweden.
In maintime he works as figurative art painter and gives different exhibitions in Belgium, Netherlands,
Spain also in Weihai China and that until now.

His works are mostly inspired by female humans and portraits of animals.The way in which the human females are carefully integrated in a total image surrounded by dreams, creatures and colours, created by the painter. The humans are a result in former, lines and colours, born in the mind of the artist. Each technique can act separately, but achieve the beauty in a compact of the total effect.

His paintings have an inexhaustible fantasy and also a famous technical knowledge.
He puts the very realistically painted figures into often unreal world, by which their beauty and vitality are emphasised even more.
He also used a combination of different techniques, watercolour, acrylic paintings, drawing, air brushing, lithography, nothing he is not familar with. This fusion of techniques makes his work more mysterious.
Some of his works are inspired by science and other from the greek and roman century,the Ilias , from there he developed his fantasies towards a thinking world of his spirit.
All his figures have the same inseparable look which more than often are the central play in his works. We are so to say hypnotised by the following looks .