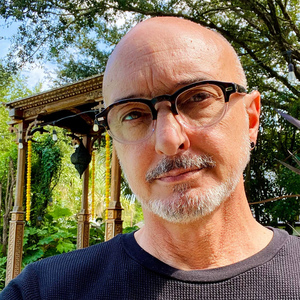 Skottie is a creative, a gardener and a misfit. He's a traditional artist by training, but more recently has embraced digital art and AI (artificial intelligence) digitally “hybridizing” muses for his portraiture. Now based in Austin, his career has taken him all over the world and has spanned everything from garden design and creative direction to tech, and more recently, digital fine art. In his early career as an art and creative director, Skottie worked closely with illustrators, artists, and photographers, on projects ranging from fashion to destination travel. This is where he honed his design eye and was introduced to the possibilities of digital.

Currently living in Austin, TX with his husband, their two acres of botanical gardens (known as Tanglewild Gardens) provide Skottie with much of his inspiration, and his extensive travel does as well. Skottie has appeared on TV and blogs for the work he’s done on his gardens and has been profiled in magazines for his art.

These works were completed in 2022. My focus this year was surreal portraiture that captures extremes and animal-human hybrids.

There have been so many instances in the last few weeks where privilege came up in conversation. Americans, rich or poor, young or old, have no clue how much privilege they have in this country. They don’t understand the privilege of voting, of being free, of having the power to elect those who are supposed to make political decisions to help the people. This was the inspiration for this image.

With this piece, I aimed to create an artwork that would go beyond race and bias. To achieve this, I chose to depict a hybrid creature from my dreams that are part antelope and part human. This creature, given the honorable name of Macbeth, is a member of a royal family in a futuristic tribe. The artwork shows a portrait of Macbeth, highlighting her unique and alluring appearance through intricate details and the blending of different species to create an image that is captivating and draws the viewer's attention. The goal of this artwork is to present an imaginative depiction of an otherworldly creature that is free from any specific biases toward the culture she belongs to.

This portrait depicts a woman from my dream who was known as Ariel, a young woman from the future where a syncretistic religion blending Hinduism and Christianity, known as Hu, is dominant. The religion is managed by nun-like practitioners referred to as Jesters, a nickname given to them due to their facial tattoos resembling the Jesters of antiquity. Ariel has always been drawn to the Jesters and has dedicated her life to their teachings. The training is rigorous, but Ariel is determined to become a full-fledged practitioner. Despite realizing the Jesters are also powerful political figures, Ariel remains committed to her training with the goal of becoming a powerful and respected member of the Jester order.

Hu is a reserved and reverent religion, despite its unique and colorful attire, including bright orange spots on a muted olive drab leather-like robe and matching winged habit. The Jesters' hair is treated with a rare substance mined from asteroids that alters the color to equally bright orange and enhances their visions. This portrait captures Ariel in a moment of contemplation, deep in one of her visions. During these visions, accomplished Jesters' eyes turn black, allowing them to access an elevated stream of consciousness.

I dreamt of a distant future, where there lived a blue golden langur named Pipo, a member of a race of intelligent langurs bred from Gee’s golden langur, native to India and Bhutan. These creatures were once tree-swinging primates, but scientists discovered that exposure to a specific wavelength of electromagnetic radiation their skin turned a shimmering blue and enhanced their intelligence. Pipo and his kind learned to speak human languages and in my dream, they served as elite guardians for the powerful. In this portrait, I tried to capture the striking beauty and intelligence of Pipo, the first of his kind.

Once upon a time, in a far-off galaxy, there lived a princess named Jacque on the planet of Itana. Jacque belonged to a race of advanced humanoids who worshiped sea gods and harvested rare red pearls from the depths of the black Itana seas. The princess had a passion for pearl diving and was trained from a young age to navigate the treacherous black waters and retrieve valuable gems. However, as a member of the ruling family, she had a duty to uphold family traditions and serve as a leader for her people.

This portrait captures Jacque in full royal regalia. The red pearls of her people are prominently displayed, beaded into the royal fabric of her gown, and offset nicely with the gold of her crown and traditional aquatic-inspired adornments. Despite her duty as a princess, the pearls remind her of her true passion and the connection to her people's heritage.