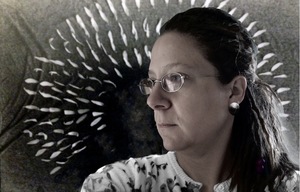 Alison Barrows-Young was born in New York City and raised in Hamilton Ontario CA. She has always been an artist and can’t remember a time when the awareness of her artistic path was not a significant part of her consciousness. Her family counts back through several generations of artist’s and she began training in drawing and painting with her parents when she was a small child. After taking a BFA from Antioch & SVA and an MFA from Florida State University, she divided her career between being an art professor as well as a professional studio artist. Alison is married and is the mother of four adult children.

I have found that forest air breathes a mixture of exotic and thought-provoking sensibility. Lush fragrance wafts in a spectrum of seasonal breezes. Leaves' flutter, boughs' lift, and stones' chatter. Boulders' meditate. New growth plays in the sun, or trembles in the cold. Elder trees, knowing mosses and stoic outcroppings each share their tales of wisdom. Every aspect of the forest possesses unique and collective thoughtfulness, offering a never-ending array of actors and personalities.

My home sits on the edge of a cliff 200 feet above the Selle Valley. In a ten-mile view, the Schweitzer Mountains are against the sky, revealing a huge granite bowl with a multi-faceted ski area. The world between here and there abounds with snow, the morning air is full of electricity, and the frost refracts the sun on the sculptural geography of the land.

“Last Light,” describes that time of year when the winter solstice has almost arrived. From my home above, the valley, the fields spread out in a dimmed coat of silver and at times, it seems only Jupiter holds a beacon to guide us into a gradual rekindling of the spirit through the longer nights.

There are late autumnal mornings when the atmosphere freezes into a dry crispness. My breath crystallizes as soon as it leaves my lips. The folds in my jacket and jeans stiffen and make a light scratching sound. More importantly, the colors seem more vivid and the forms of the vegetation seem visually sharpened. My grandmother used to call mornings like these “Cold Snaps.”

When winter rains take on increasingly torrential proportions, it’s fair to assume the spring season has begun. Seasonal springs, overflow, and gush from the mountainside. Enormous icicles cleave into deeply muddied ground and evergreens dump bucketfuls of water from their thick canopy of tightly woven needles. The level ground is riddled with overflowing puddles and potholes and woods to the side of our house, with only a simple push to the fanciful, looks like a waterfall.

“Giant Upon The Plains”

Extraordinary weather phenomena, such as tornadoes are clearly terrifying, especially out on the Great Plains where you can see them moving as colossal towers between earth and sky, unpredictable in their wild path, extemporaneously destroying what had seemed so certain and solid. I find in the terrible reality of the ever more forcible storms a certain breathtaking beauty in our mother’s rage.

The summer of 2014 brought an onslaught of horrific wildfires. Surrounding me, nature obscured, and darkened, and the sky filled with smoldering ash. As the summer burned on, the severity of the fires was merciless. It was the first time I heard the phrase ‘Super Storm’. Now, the discussion of Global Warming was no longer just a threat, I was watching it overtaking us. I saw a satellite image of the smoke trailing over Iceland. That infuriated me, the sight of our national carelessness sweeping over another distant land was too much. The question as to how I might faithfully render the effect was sharp in my consciousness. For me, ignoring the moment was not the answer and yet, I find it impossible to describe nature as defeated. I closed my studio door and went to work, blending the different colors of summer with each other to create an unlikely blur of tone and value. I slammed, poured, threw and jabbed at the panel’s surface until I saw what I felt. It was a breakthrough.

The loss of a family member in early spring allowed me to search for his essence in the vast and multi-layered landscape typical of Northern Idaho. As it swirls upward from the deep lake, to the grass, through the wooded cliffs, up the towering crags of the mountains, lifts into great castles of floating clouds and soars into infinite blue skies, the world seems endless and full of spirit.

On my land, I have had the opportunity to live more deeply with each season than I have been able to in the past. I found that in addition to the familiar big rhythms, there are smaller movements, which further define and detail the atmosphere and natural processes. “Autumn Tides” is a painting depicting these passing notes. The golden aspens speak of the returning coolness of the late autumn. The yellows and whites against a turquoise sky means autumn is in its last throes.

In Northern Idaho, there is definitely a season after winter, but for most of that period, it wanders along in a state of cold, wet bark, dangerous ice, and deep mud to the hips. The presence of a full and conscious spring as I have known it in other places seems as if it will never arrive. In fact, it isn’t really confirmed until late May when suddenly, there is a rapid burst of green hues evolving from chartreuse to tourmaline, to emerald, along with an overwhelming sense that it might be summer.

The extraordinary luminosity reflected from the outer wall of the forest to the open ground in front of it creates a dramatic setting of atmospheric light and shadow in every day and night of every season. The road to my land provides such an environment, and I have seen many such scenes. It first crosses acres of farmland, and then suddenly enters the dark depths of the woods. In “Luminous Winter Night,” I wish to describe the enchanting mystical, fairyland effect of the reflected moon from a sentry of trees into the crystallized air and onto the snow that I have seen while approaching the dark embrace of the woods I call home.

For New Years in 2017, I spent ten days in silent meditation on Cloud Mountain; a Zen Temple, in Oregon. As the name suggests, the mountain top location is often adrift in the clouds that roll off the Pacific Ocean and settle there. The seasonal cold has a distinct effect on the fog creating a particularly dim and frosty light that settles on the ferns in beaded mists. The heavy, billowing air tends to confuse the distance by filtering the light, as if behind a moving silk veil, making the landscape look dreamlike and soft.

This is the first place I have lived where I have experienced “starlight.” Looking up at the vastness of the night sky, the stars appear in multi-layered swaths of infinite distance and density. In summer, the lush forest has the final say in what happens on this land, cutting into the edge of the extraordinary display, capturing the sky, dancing in the bright reflections around its soft short shadow outline. The thick fir fronds, lying both side-by-side and intertwined create windows that appear as translucent fluttering moths refracting and patterning the glistening heavens and cutting them into multiple planes of view.

* “September Moon,” is in the permanent collection of International Painting at the Contemporary Art Museum in Geoje South Korea.

“No Water in Flint”

I spent a good portion of my life living near the Great Lakes. The skies are more often than not filled with moisture. In the winter, the day sky, heavy and dense with ice, barely emits the sun’s rays and you can gaze directly at it as if looking from a watery depth. Existence in that Urban, relentlessly long, wet winter must seem particularly cruel to those who have no access to clean drinking water.

“The Night The Stars Fell”

Unlike any other winter I know of, the winter in northern Idaho has captured my imagination. Here, the clear winter night is breathtaking; a magical view showing thousands of twinkling stars. In “The Night The Stars Fell,” I wish to portray how on nights when a bright distant moon lights on falling snowflakes, they may appear very much like the stars themselves and seemingly dance and play amongst them. At such a moment, these whimsical sights tantalize my imagination and it is possible to view the mingling white clusters of flakes and stars as if they are just the stars falling gently to the earth from their wide strips of blackened sky, silently settling on the belts of darkened ground between glowing blankets of white snow.

The sun is always at an angle in my northwestern home. In summer when the length of day finally comes to a close, the darkened clouds and summer mists above the lake take on a neon glow that befits the end of a long joyful respite on the cool waters of Lake Pend Oreille.

“Alive In The Night”

Sometimes, visitors seem to add mystery to the summer landscape, especially at night, when lanterns glow on the lake and between the trees appearing as low hanging moons and roughly strewn stars. What is especially strange is how they reveal the form of and provide locations for areas that are usually soaked anonymously in darkness. In “Alone in the Night,” I hope to emulate the otherworldly alien feeling played out with dancing shadows, and distant music in apparent disregard of the resident moon and stars above.