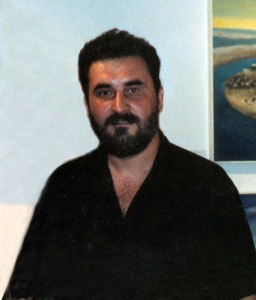 I was born in Romania on December 14, 1952, in Ciupa, a small city one hundred miles north of Bucharest. When I was three years old, my parents moved to Bucharest where I lived until August 1986. I came to America by myself as a refugee from Communist Romania.
When I was thirteen, together with a friend, I painted in oil a copy of “The Death of 10,000 Thebans” or “St. Morris” by El Greco. Then I studied art in Bucharest. When I came to Los Angeles, I studied art again at Otis/Parsons and eventually I graduated from Syracuse University with a MA in illustration. I studied illustration because I considered “fine art” not “fine” anymore for me. I had nothing to learn from so-called modern art. I feel that this modern art does not help a human to become a better human being. On the contrary, it creates confusion and a dangerous, abstract, artificial way to understand reality, excluding the essential term of beauty from art. So I studied the old masters in order to understand their way of expressing their feelings, to learn their language of art and their approach and understanding of beauty.

I have read also thousands of books on diverse subjects related to art, the history of art, history in general, philosophy, and political events, which are reflected in art.

I have taken part in over seventy art shows and festivals in the United States, Europe, and Asia. The next period of my life will be more focused on my profession as an artist. It is my duty, because it was always within me and will be there until the last moment of my life.

Art in general is suppose to be a sum of ideas based on human emotions and state of mind. It was the idea at the beginning…  Art is opposite to NOTHING. In the Universe, nothing does not exist. This nothing (nihil) is a conventional false value, the same like money. Both have been cultivated in human mind, special in modern era, both very effective tools of oppression. Art should enlighten our spirit not break.
For the modern man, philosophy is religion and art is an attempt to express a mystery, which who do not have to call the truth. Selfish humans replaced faith in God with faith in them-self : "God is in Heaven, and I am God on the Earth" (Joseph Stalin). There is, in modern art an element of protest transformed in a period of transition. Transition to what? Some of us would say that we are going somewhere, not that we are going from bad to worse. The extreme forms of Dada movement, which was a declaration of spiritual bankruptcy at the beginning of World War I, and worse followed: World war II and so on... Dada made cynicism, anarchy, and rebellion into core values.
"Today, the subject of art seems to have suffered a decisive alteration, or looks to be as it is disappearing. The art still talks around us, often with a firm decision of talking about nothing". (Gaetan Picon).
So, looks like the modernism is building an incredible monument to GOD NIHIL.
Our world is rich and diverse in form of art, culture and colors. Why reduce art to a cold abstract, nihilistic, deformed and monochrome? If religion unites people, modern art isolates them.
"The third millennium will be religious, or won't be at all" (Andre Malraux).

“The Game of Life”

“Who is Who and What is What”

“The Truth is Stranger then Fiction”