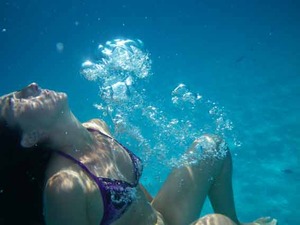 Stefania Milazzo was born in 1976 in Catania, Italy. She graduated in Molecular Biology in 2003. She has studied Photography and Video Documentary in Catania and Rome.

She has done various short documentaries as well as Dance Videos.
In 2008, she has won the first prize as best documentary at the Thessaloniki Strange Screen Film Festival with the Short Documentary Film Abuso. In 2009 she has received two bursaries from Film Buero Franken Nuernberg to make two Short Films (L’Attesa – Talking Ruins). L'Attesa won a prize as best story at the Immagine Continua Short Film Festival 2009 in Italy.
In 2010 she has received another bursary from Film Buero Franken Nuernberg to make an experimental short documentary film (Ein anderer Blickwinkel).

In TERRA E MARE, the borders between the Earth’s world and the Sea’s world are depicted in a light painting. The different shape and light combinations express the various ways these two worlds can meet. The intimacy of her images is the result of a continuous research and experiment with light that makes everything an oneiric game: The Earth and the Sea can be purely evocative of infinite suggestions.

„Farben der Stadt“ (City Colours) is a site specific photo- installation . The images of this work try to represent the town of Nuernberg in Germany.
This work was a challenge with this grey and static town lacking of colour and motion and it aims to give it intensity and to brighten it up through the exploration of hidden colours. The shots have been taken in motion and the pictures have been mounted in such a way that one has the impression of the colours in motion.The pictures hang from the ceiling and they twiddle and twirl through the air.