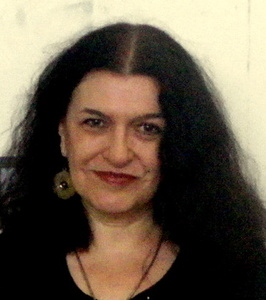 Toledo is a native of Argentina who moved to the United States in 1988. She graduated from the National School of Fine Arts Prilidiano Pueyrredón and National School of Fine Arts Manuel Belgrano in Buenos Aires. She also earned a degree in Painting from IUNA (National University Institute of Art) in November 2011.She has exhibited her artwork in Argentina, Bangla Desh, Brazil, Bulgaria, Colombia, Greece, Malaysia, México, Spain and the USA. She has won 23 awards for her drawings and sculptures in her native country. In 1997 she was recognized as Outstanding Woman in the Arts and was honored with the Estrella Award by the Hispanic Women’s Network of Texas in the USA.

Since 1993 she gave conferences about the diversity of beliefs, languages, traditions, races and lifestyles and their celebration, called "Pure Diversity: A quest for Identity" and they took place at Barnard College in New York, University of North Carolina in Chapel Hill, University of Maryland at College Park, Texas Woman’s University of Denton, among others in the USA.

From 1993 to 2002 she was very eclectic in her activities: she has served as juror for Art Competitions, authored the novel "La Semilla Elemental" and a collection of short stories, "Dulce de Leche", and secured several book covers. She worked as a reporter for the Fort Worth Star Telegram and as a Curator for an Art Gallery in Austin, Texas.

From 2003 to 2005 she focused in her paintings that were permanently exhibited at Mi Casa Gallery in the South Congress area in Austin. She also worked as Art Instructor for LUPE ARTE, a nonprofit organization.

In March 2007 Toledo moved back to her country. At the end of that year she participated for the first time in a mail art call: 1st International Mail Art Exhibition in Thessaloniki, Greece. Since then she has participated in many calls from all over the world.

She says about her work: "Art is a magical tool that I use in a quest for identity. Through my sculptures, paintings and drawings, I show the beauty that exists in human differences, developing a theme of work that I call Pure Diversity. Although the mass media imposes cultural ideals, humans are diverse and creative. Diversity is the treasure of humanity; this is the message that I communicate with my body of work."

In this series of paintings I am trying to show the beauty within diversity.There is not such thing as universal beauty, because the Human Race is diverse and every society has its own characteristics, values, and culture. I feel that after the twentieth century, with the mass media invading our homes, the whole world has been exposed to "universal values" that we are learning and adopting not only as the truth, but also, as our own. There is no such thing as "universal beauty", I repeat, and that is what I try to show with these portraits of children and dolls. More than an object, a doll is an extension of the child´s family, many times the first close friend, with a distinctive personality and its own personal features. Every doll carries the values of the culture where she was born, every doll has a story to tell, and every doll has a unique soul. The differences from one doll to another are amazing, this reveals our creativity. It also shows our differences and makes us aware of our diversity. It is within this diversity that I found the "universal treasure of human kind".

In this series of paintings I portrait the existence of all those women (including myself) which identity was fragmented between two cultures.
Beyond their beauty and fragrance and the freedom of flying, flowers and birds have a particular symbolism in my personal mythology.
Flowers: I paint gardenias to symbolize enduring love, because my father always gave to my mother blossoms of that flower. I painted sunflowers for the first time when my sons were almost fifteen years old. While I was painting "My sunflowers" I remembered when they were kids and used to follow me everywhere, making me feel like their Sun. Since that painting, the two sunflowers in my artwork always represent the spiritual beauty and strength: Santiago and Angel´s inner qualities.
There are two birds that I portray in my paintings: the crow and the "little black head".
The first one is intelligent and loyal to one mate in a lifetime. Researches find that they display empathy toward their partner when in danger or need. These are ideal qualities of a soul mate. With the second I symbolize my father spirit. He was a Guarani Indian and during his youth indigenous people of Argentina were contemptuously called "cabecitas negras" (little black heads).

“RED WITH R OF MINACORI”

“FRIDA AND THE CARDENAL”

“I GROW A WHITE ROSE”

“EVA AND THE BLACK HEAD”

“TWO GARDENIAS FOR YOU”

“IN THE GARDEN OF DREAMS”

“IT BRUSHED LOVE ALL OVER ME”

“EVA, PORTRAIT OF MY MOTHER”

“ENCOUNTER ON A DREAM”

“INTI ON MY BACK”

“A BIRD IS HOLDING ME”