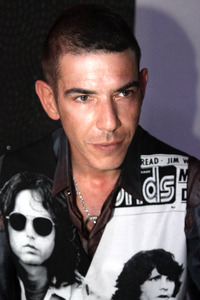 Born in Sofia, Bulgaria, Ilian Rachov starts his artistic career like
self-taught man in 1988 realizing copies of medieval orthodox icons and
frescoes,re-discovering ancient techniques of gilding methods and how to
engrave after the golden backgrounds of the icons.

His personal elaboration of that kind of old techniques and his modern view
of this very antique art helps him to develop an own personal and
unmistakable style in the iconography field.
This makes him very popular in Bulgaria and outside of the borders ,finding
him many estimators and followers.
Many of his icons and oil paintings are properties of Museums and churches
in Bulgaria, Germany,Spain and Italy:

Ilian has participated in 12 exhibitions in Hamburg,Germany,realized thanks
to the Honorary Consul of Bulgaria – Prof.Imeyer and his wife Mrs.Petra
Imeyer.

From 2003 till 2006 Ilian created for VERSACE and VERSACE Home Collection
six collections with baroque pattern designs used for prints on scarves
,fabrics ,clothes ,cushions ,lamps,ties and bed spreads ...used till now by
Versace in their actual collections.

In 1996 for the unique chromatic stile of his works he receives the HONOUR
according to which "The Icons painted by Ilian Rachov show an AESTETHIC and
WEALTHY EFFECT".
In 1996 he paints for the "Nikola & Latina Tanev Foundation in
Chicago,U.S.A. "The Angel of Peace and Freedom".

In 1997 he receives the Prize "Golden Phenomenon of Bulgaria" for his
contribute to the Bulgarian figurative Arts.
In 1997 he participates with live show at the Icon Exhibition in Alstertall

In 1998 he is invited again in Hamburg from the Ethnographic Museum to show
his works there. In Alstertall Einkaufszentrum he organized for the second
time the Icon Exhibition with live show.

In 1999 from the President department of Bulgaria he received the commission
to execute two portraits of the First Lady of Bulgaria - Mrs.Antonina
Stojanova.
In 1999 he is invited again in Hamburg to show his icons and to organize
again the Icon Exhibition in the Ethnographic Museum and Alstertall
Einkaufszentrum.

In 2000 Ilian received from the Mons.Antonio Mennini - Vatican Ambassador in
Sofia the commission to create in case of "The Jubilee 2000" a big painting
representing The Holy Lamb of God posted later on the ceiling of the Church
in the Vatican Embassy in Sofia.
In 2000 he realize again several shows in Hamburg, Germany.
In 2000 Ilian decide to move in Italy for working and living there.

In 2001 he paints the first icon in Byzantine style of St.John Bosco for the
church of the Salesian's Order in Turin,Italy.
For the same Order he executes also a big oil painting now in Aula Magna of
the International Salesian's Institute in Turin.

He continues to make shows in Germany and to participate in several
exhibitions in Italy.
In 2002 he executes the big wall-painting on the altar wall in the
Salesian's Church in Crocetta,Turin in Italy.
In 2002 Ilian created also a big icon of The Dormition Of The Virgin for
Mons.Auza - secretary of the Vatican City.
In 2002 he is again in Germany for the Annual Icon Exhibition in Hamburg.
In 2003 he paints numerous icons and paintings for many private and public
collectors.
He is one of the Artists presented on the International Art Show in Villa
Amoreti in Turin,Italy.

In 2003 Ilian was contacted by VERSACE Fashion House to create projects for
baroque pattern designs for prints over the VERSACE products.
He realized many designs for pillows,scarfs,ties etc. used till now by
VERSACE.

In 2005 his designs created for VERSACE ware shown in the annual show
“Salone del Mobile” in Milan. They could be seen also on the official
website of VERSACE Home Collection.

In 2005 he paints also numerous paintings in oil and icons for many private
collectors and for some churches in Italy.

In 2005 he was contacted by The British Royal Mail for realizing a limited
edition of Christmas Stamps with some of his icons.
In 2005 he still create designs for VERSACE, very appreciated all around the world.

In 2006 his works are shown in the Exhibition “CALEIDOSCOPIO” in “Gallery
Crispi” in Rome.
In 2006 Ilian continued to search and create new contemporary baroque style ornamental designs for VERSACE HOME COLLECTION.

In 2007 he restored the old fresco ceilings in one important property in
Nizza Monferrato, Italy.
In 2008 he created the ceiling paintings for numerous important commitments
in Italy.

In 2009 he participated in the International Exhibition Italia Arte in Turin
and win the prize for young emerging artist.

He realized a big oil painting “The Tiger Hunt” for The Furniture Salon in
Milan c/o Wozzup Showroom in Milan.

In 2010 he created a portrait of the famous italian tv hostess and journalist Barbara
Castellani.

Realized also an big icon for the altar of a church in Turin, Italy called
“The Pregnant Virgin”.

In 2010 he won through more than 300 artists from all around the world The
International Prize “Artist Of The Year” during the annual international
exhibition Italia Arte in Turin.

He realized an important icon commissioned from the Cardinal of Turin,
Mons. Severino Poletto.

In 2011 he was in the cast of the movie “ Venuto al Mondo” ( “Twice Born”) directed by Sergio Castellitto and Margaret Mazzantini with Penèlope Cruz and Emile Hirsch.

He realized a portrait of the actress Penèlope Cruz, now in her private collection.

Being an artist with high aesthetic sense he exhibit some of his more
important works during the MISS World Italy in Milan and he was called to be
a jury for important events like Miss Cinema Italy, Mister made in Italy
Piedmont, MISS FERRARI etc.

During his artistic career he participated in various Television shows like artist
and expert of Art.
Some of his works are published in numerous magazines and newspapers like:

His official website is : WWW.ILIANRACHOV.COM
He is on facebook and on most important art websites and social networks.