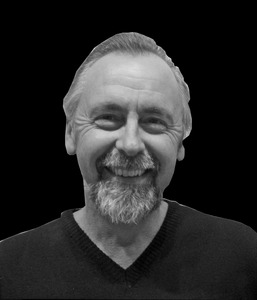 I was born to German parents in Winnipeg, Canada in 1953. My father was an engineer and my mother an artist who had studied under the direction of the German painter Reinhold Ewald. Our family moved to Vancouver in 1956 where I grew up. I was convinced from an early age that I was to become an artist and received my first art lessons from my mother who always told me that if you can draw the human figure you can draw anything at all. In 1971 I enrolled at the University of British Columbia to study art. In 1973 I left for Europe and a period of travel. Rome, Athens, Paris and Vienna proved inspirational and in 1974 I took up residence in Vienna to study art. Returning to Canada in 1975, I spent a year in Winnipeg studying art, then returned to Vancouver where, under the tutelage of the renowned Canadian artist Gordon Smith, I earned a degree in Art Education in 1979.

A future as a high school art teacher was not for me though. I went to work as a draftsman instead, employed with various engineering firms in Vancouver. So began a long period of work, painting and travel. But by the early Eighties the work as a draftsman had dried up. Although my circumstances were poor, I was for a few years able to devote my time almost entirely to my artwork. It was a frustrating period however, and although I made great technical strides, mastering the craft of drawing and painting, I felt hampered and saw that my artistic directions were leading to dead ends. Seeking a way out, I turned to drawing as a way of finding the source of creativity. My images, derived strictly from my imagination, evolved steadily from a minimal, primitive aesthetic toward a depiction of people and environments with a strong poetic sensibility. During a trip to France in the spring of 1988 to meet with my future wife Nadine, I caught a glimpse of Nadine with “a palm tree growing out of her head”. This vision provided a link between the individual and the environment and it was this essential connection between person and earth that laid the groundwork for my rebirth as an artist.

Having found full time work once again, Nadine, her young son Vladik and I set up house in Vancouver the following year and in 1990 we were married. Nadine had become my muse and provided unshakeable support and encouragement. In 1994 our daughter Sasha was born, and I celebrated my happy family life in drawing after drawing. Though the distractions of family and work demanded a lot of attention, the results of that earlier visionary breakthrough slowly bore fruit. I had started carving figures out of paper leading to my characteristic silhouette shape, which is now at the base of all my work. A continuous creation of these collages ensued and established the fundamentals of my unique and original artistic achievement. This achievement was heralded in an exhibition of collages in 1998. It was around this time however, that our son Vladik was stricken with cancer; his battle with the disease led to his tragic death four years later, and plunged us into a long period of deep grief.

From the bottom of this grief came a slow awakening. There followed the most intense and focused period of creation in my career leading to the invention of a totally new and original way of painting. By combining the breakthroughs I’d made using drawing and collage, the figures I had depicted as unified with the earth now also became spirit without the loss of their physical earth-bound nature. In 2005 an exhibition of large scale paintings proved very successful and demonstrated mastery of my art and my maturity as an artist. Since then my art has never stopped reflecting this originality and is attracting more and more attention from local and international collectors.

Paintings that delight in the sensuous joys of colour and paint

The most personal and direct way of creating visual poetry