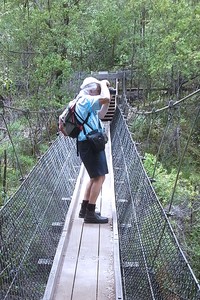 Robert (Bob) Perriam, for forty years a field geologist working in the exploration industry in remote areas of Western Australia, I carried a camera and photographed the landscapes which I visited. Now retired I use a small motor-home to make photographic trips to remote and scenic areas. My preference and inspiration is for pristine wilderness landscapes, trees and wildflowers untouched by the hand of man.

I do not follow any specific artistic style, or seek to imitate the work of any artist. I seek only to depict in a natural way, the often-harsh beauty of the landscapes, vegetation and lighting of Australia, in particular the landscapes of the inland deserts.

In my photographic practice, I work entirely with ambient light. I do not use flash because it produces garish colours, I do not use high dynamic range because of its un-natural contrasts, and I dislike oversaturated colours. In using ambient light, as far as possible I choose camera angles relative to the sun to give dramatic lighting effects, however, I usually have to take scenes at the time of day and in the weather in which I find them, so not every image has dramatic lighting.

I have now extended my practice to “Hangable Wall Sculpture.” These are hangable works prepared using curly bush timbers collected from long-dead fallen logs during my years as a field geologist. Bush timbers are heat sterilized and mounted on carved timber slabs

Images in this profile illustrate a small selection of my landscape and wildflower photographs, rendered digitally as watercolour, oil/acrylic painting effects, and a streaked 'aura' rendition, which some might see as an aura of the earth.

To purchase frame-able prints of images by Robert Perriam, visit:

An extensive folio of images is available.

Prints can be delivered internationally, with payment made by credit card or Pay Pal, in Australian dollars, US dollars or UK pounds.

Hangable wall sculptures can be purchased from the artist, but because of the use of natural timbers, are only available for sale within Australia, with payment through PayPal. Contact:

A selection of images are available for download on Adobe Stock. Include 'Robert Perriam' in your keyword search.

The Royal Hakeas are native to Fitzgerald River National Park on the South Coast of Western Australia. The leaves remain on the plant for several years and gradually change colour from yellow-green to red as they age.

Mount Frankland is a granite dome, rising a few hundred feet above the surrounding forested landscape.

The Royal Hakeas grow in and near Fitzgerald River National Park on the South Coast of Western Australia, and nowhere else. They are known for their spectacular leaves which are yellow in their first year, then turn orange and red in subsequent years. The flowers produced in May, are standard pink Hakea flowers and are overwhelmed by the leaves.

These wall-hangable sculptural panels are constructed using naturally shaped and weathered curly bush timbers, mostly Eucalyptus, collected during my years doing geological field work. The timbers are mounted on carved panels of ornamental timbers, sawn from garden trees which had become too big for their situations and had been removed. Because of their origins, all bush timbers have been heat sterilised at 120 to 130C (250 to 265F) before use.

These hangable sculptural panels are for sale only within Australia.

Sculptures 2 and 3 were awarded Runner-Up status in the 38th Artavita contest, April - May 2020.

Landscapes of Western Australia and the Northern Territory

Western Australia and the Northern Territory cover a huge area, with many different climates and topographies, and a range of landscapes. The digitally manipulated photographic images presented here in a range of effects represent landscapes which I have visited, both in the course of my work and on motorhome trips since retirement.

The Hot Dry Inland; where I spent much of my working life. Mostly low relief landscapes with salt lakes and breakaways, low cliffs at sudden changes in level of the landscape.

The South Coast; Includes many beautiful headlands, bays, beaches and inlets. Some are difficult to access, and most beaches are not crowded. Some coastlines such as the Torndirrup coast near the City of Albany face the south westerly winter storms of the Southern Ocean, and are wild rocky places.

Inland Waters; Range from the dark rivers and dams of the South West to the salt pans of the inland, to the rivers of the Kimberley and billabongs of the Northern Territory.

The Kimberley; A remote, rugged and beautiful region in the far north of Western Australia with varied and often spectacular scenery.

The Top End of the Northern Territory; The near coastal region of billabongs (wetlands), high plateaux, and river gorges, populated by crocodiles and many species of water birds. These images were captured in Kakadu National Park (the Yellow Water Billabong) and Nitmiluk National Park, (the Katherine Gorge), during a motorhome expedition across the Kimberley and Northern Territory in May - June 2019.

“The Inland; Native Pine on Breakaway”

Watercolour Effect.
This image won and honourable mention in the ninth Artavita Contest.

“The Inland; Causeways on Lake Lefroy”

This image won an honourable mention in the 2012 Artavita International Masters Photography Competition.

“The Inland; London Bridge at Sandstone”

This image won Runner Up status in Artavita Contest No 25, October-November 2017.

“The Inland; Breakaways at Kanowna”

“The South West Forests; The Valley of the Giants”

The early morning sun shines through dew-covered Eucalypt leaves in the forest.

This image won runner up status in the Artavita competition of July 2017.

Stromatolites (living rocks) are among the most ancient life-forms on earth; their fossilized remains are found in rocks dated radiometrically at more than three billion years old. In this current era, they can only form in waters where marine organisms which would smother or eat them cannot live. The waters of Hamlyn Pool are hypersaline, so other organisms cannot live there and stromatolites form.

In the traditional lore of the local aboriginal people the stromatolites were "The Old People,' the Ancestors

The images of The Gap won runner up status in Artavita Contest No 24, August 2017.

Yeagarup beach on the south west coast of Western Australia, is accessible only by four wheel drive, with reduced tyre pressures, by way of several kilometres of sand track through the dunes, including some dune climbs which are a challenge even to experienced off road drivers. With such difficult access, the beach is, at most, very sparsely populated, but for those able to get there, Yeagarup provides endless pristine dune and beach photo opportunities. Here are a few examples, presented in Oil -Acrylic effect.

Images from this group won Runner-Up status and a Certificate of Excellence in the 18th Artavita contest, March 2016.

The dark waters of the Blackwood River at Sue's Crossing. The waters are dark with tannin which they have absorbed from the surrounding forest.

This image won Artist of the Month in Photography and Digital Art in the April 2017 Artavita competition.

The South West of Australia does not have large rivers or deep lakes, but here and there the forest opens to reveal a dam or pool and the dark waters reflect the tall timber of the forest.

Lake Lefroy is usually a salt pan in the inland, but when there is sufficient rain, water flows into it and forms a shallow hypersaline lake with low islands. On this day, a dramatic cloudscape combined with a mirror-calm lake to form this scene.

Granite domes are a feature of the landscape of the Southern part of Western Australia, and many have wave formations on their margins. Here are some examples, all rendered in oil/acrylic effect.

Images from this group were awarded runner-up status in the 21st Artavita Competition, October to December 2016

A remote, rugged and beautiful region in the far north of Western Australia with varied and often spectacular scenery.
The series of images of Limestone Cliffs in Giekie Gorge were taken during a late afternoon boat cruise along the Fitzroy River through the gorge. The bleached effect on the lower part of the cliffs is the result of submergence of that part of the cliffs during the annual wet season floods. The sculptural forms of the cliffs are the result of solution weathering of the limestone during rain and submergence.
Images in the group entitled 'Limestone Cliffs in Giekie Gorge' won Finalist / Certificate of Excellence status in the 32nd Artavita contest, Covers of International Contemporary Masters 13, June 2019.
The image "Stairway to the Moon; Roebuck Bay, Broome" won finalist status in the Circle-Arts Competition to exhibit at Spectrum Miami in December 2019

“The Kimberley; Pandanus and Eucalypt”

Ghost Gums with their white bark, renewed every year are characteristic of the north of Australia. This one lives in the East Kimberley.

Corkwood (Hakeas) are small trees which grow naturally into Bonsai shapes. This image was taken looking up into the crowns of two trees in the East Kimberley.

“The Kimberley; Stairway to the Moon, Roebuck Bay”

These images were captured in Kakadu National Park (the Yellow Water Billabong) and Nitmiluk National Park, (the Katherine Gorge), during a motorhome expedition across the Kimberley and Northern Territory in May - June 2019.

Images of this group won finalist status in the 33rd Artavita competition in August 2019,

The desert trees of Western Australia produce barks and timbers with interesting textures and colours. The Eucalypts grow new bark each year and shed the old bark often producing smooth colourful new surfaces. Dead wood of many species weathers over decades to beautiful patterns and textures, reflecting the grain of the wood, the weather and often the activities of generations of termites.

“Textures of Timber; Dead and Alive”

“After the Fire, New Life”

A scorched Eucalypt trunk producing new shoots after a fire. This image was entered with others in the January 2022 Artavita competition with the theme of 'Hope.'

The images in this portfolio are details of native wildflowers which grow mostly in the heathlands of Western Australia. Some of the images are of native orchids, of which there are hundreds of species in many genera.

The red beak orchid is widely distributed, but flowers only after being burnt over by a summer bushfire. Otherwise it is visible only as a single leaf flat on the ground.

The native range of the Royal Hakea (Hakea Victoria) is Fitzgerald River National Park on the south coast of Western Australia and nearby areas. The Royal Hakea is noted for its spectacular coloured foliage, which stays on the bush for about three years, changing from yellow when new to orange and red as it ages.

“The Green and Red Kangaroo Paw”

The red new growth and seed pods of an Accacia, in the Ravensthorpe district in Southern Western Australia.

The Black Coral Pea, growing at Tozer's Bush Camp near the South Coast of Western Australia

The butterfly Orchid, one of many Caladenia species, growing in the South West of Western Australia.

The Rattling Beak Orchid, growing at Tozer's Bush Camp near the South Coast of Western Australia.

“The Red and Green Kangaroo Paw”

The Royal Hakea grows in and near Fitzgerald River National Park on the South Coast of Western Australia, and nowhere else. The species is famous for its spectacular leaves which are yellow in their first year, then turn orange and red in subsequent years.

The flowers of the Royal Hakea occur between the leaves of the new yellow growth. They are standard pink Hakea flowers, and are overwhelmed by the leaves.