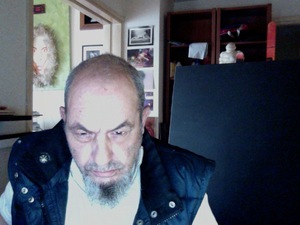 Artist
- address: 3-5, Spyridonos Trikoupi St., 10683 Exarcheia
-birth: Sparta, 03.02.1957
- parents.: George, Zoe
– Education: He graduated from the 5th Exarcheia High School and then studied with the the great artist Costas Eliades. In 1978 he moved to Paris where he studied painting at the École des Beaux-Arts. He continued his studies with sculpture at the École des Arts Plastiques, and drawing at the Académie de la Grande Chaumière. He completed his artistic education with photography studies at the École Supérieure des Arts Modernes. During his studies in Paris, he was under the mentorship of sculptor Kostas Koulentianos.
During his studies in Paris, he held his first solo exhibition at the Bibliothèque de Mantes-la-Jolie. Since then he has held several solo exhibitions and has been consistently exhibiting his work at the "Medusa" art gallery since 1997. The most important solo exhibitions include the following: "Domestic Farm" (Medusa Art Gallery, 1997), "Flowers" (Medusa Art Gallery, 2002), "Kookoo" (Medusa Art Gallery, 2008), and the solo exhibition in Hydra in 2011. He has also participated in group exhibitions such as the "ELTEKA" group exhibition in Menidi, in 2011. He also participates in the “Art Athina” exhibitions, and is involved in directing performance art.
Works of him are in private collections of many collectors, including Alexander Iola, Dakis Joannou, Leonidas Beltsios, David, Ion Vorres, Panos Malamis and others
Many art critics have published articles on his work, among which George Tzirtzilakis, Olga Daniilopoulou, Sotiris Pastakas, Megakles Rogakos, Nikos Xydakis, Katerina Gregou, Maria Marangou, Vivi Vassilopoulou
- Hobbies: Free diving
- Foreign languages: French
- E-Mail: pilinard@otenet.gr
- Website: www.panagiotislinardakis.com.