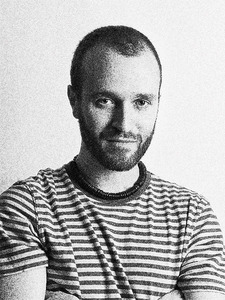 After a master degree in physics, Fabiano Busdraghi (1980) decided to dedicate his life to photography and writing. He lives and works in Paris. His work (mainly conceptual yet aesthetic photography) has been shown in Italy, France, Spain, Germany, UK, Brazil and Japan.

A mascaron is an ornamental face, usually human, sometimes chimeric, whose function was originally to frighten away evil spirits so that they would not access a certain place. Widely used during the antiquity, grotesque or hideous masks decorated many architectural elements, such as temples, tombs and doors architraves. The concept was subsequently adapted to become a purely decorative element and was widely used in architecture from XV to XIX century.

In European cities, mascarons are still everywhere. Every day, since centuries, they observe our life, they track our movements, they diligently oversee their street corner. Hidden just behind the surface, under our forgetful look, a parallel world is breathing, a dark city made of a mysterious demons swarm.
A multitude of devilish faces, each one so unique. Their names are inspired by mythology, demonology, folklore and literature from any age and all around the world.

In our common language, stone heart means to have no feelings. We think we experience emotions, while mascarons are just void stones. How is it then possible that inanimate objects come to life and express stronger sensations than human beings?

These photos are portraits of mascarons, the demons of the streets.