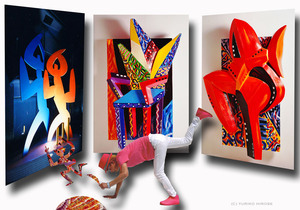 I was born in Tokyo, Japan. When I was a child, my family lived in various regions of Japan due to my father being transferred for work. Thus, I experienced various cultures, since one region appeared more western, while another region was more traditionally Asian. This mix of Western and Eastern cultures intermingled together in my mind as I grew up. When I became an artist I held many solo and group exhibitions and made commission works in Japan. After that I stated to make art works in Los Angeles, but I had mixed feelings when I received my permanent residence in the USA, because my lawyer told me this good news on September, 11,2001.

I held solo and group exhibitions in New York and New Jersey, where being immersed in western culture made me rethink my identity again and again. After I returned to Japan I started to make art works using Japanese and other Asian and world patterns, form and colors. My message is an expression of the exchange of between everything western and non- western.

A unique culture has formed in Asia from taking in Western culture.
Until now, my art works have been an expression with ki-Energy (spiritual- energy) as the theme. It is a turning of the Asian’s mind to the world, which is common to Westerners. I want to fuse this Ki-energy theme and develop big exchange with art centering on Asia.