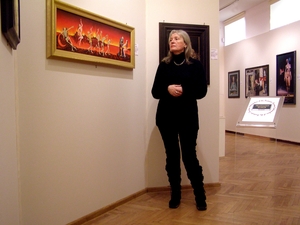 After secondary school, she enrolled in Faculty of Philosophy at Zagreb University, with Ethnology and Philosophy majors graduating in 1976.That same year she started having private lessons at Academy of Fine Arts in Zagreb with Marin Tartaglia.

In 1980 short study period in London.She did further studies in Stockholm in 1984, at Kunst Akademi and Balet Akademy (drawing in the classical balett class).
From 1985 to 2000 she kept up numerous contacts with representative of Vienna school of fantastic realism.She visited private studios of artist Arik Brauer,Rudolf Hausner,Ernst Fuchs,Franz Luby.
From 1986 to 1987 she craeted print portfolio REFLECTIONS
(containing artist's drawings and poetry).
In 1995, at instignation of Jano Kichl, an exhibition on the topic of SWAN LAKE ballet was held in Croatian Nathional Theatre in Zageb.
She was awarded o prize for exhinition 100 SACRED VISIONS in Payerbach,Austria.
Her picture was used for the title cover the book TEMPTING DISASTER (published by Raw Dog Screaming Press edited by Edward Lawson, 2005.
From 2003 to 2005 she did a circle of works devoted to sea-sirens mermaids of sea.The result is graphic portfolio AQUAMARINE with eight prints,text by Dina Lenkovic-
In 2005 the Journal FEMSPEC ,an interdisciplinary women's periodical devoted to critical and creative works of fantasy,magic realism,surrealism, myth, folklore and other supernatural genres printed on its cover( Vol.VI.2.2005) a Dina Lenkovic work (oil on canvas) The burning city.
In 2008 was printed book of Art work of Dina Lenkovic with 160 pages with numerous reproductions and also with two essays by Silvano Levy and Stanko Spoljaric art critics.

In 2011 year Dina Lenkovic is in permanent collection of Phantastic Art museum in Vienna Austria.

Most of all, Dina brings to life the Greek myth of the sirens,the sea deities who lived on island called Sirenum Scopuli, place sorrounded by cliffs and rocks.From there they exerted their malevolent power.They were feard by sailors, who know that anyone who sailed too close to these alluring female tormentors would be entrapped by their music.
detail of essay by SILVANO LEVY from Dina's Lenkovic book

“Music in the sea”

The Shadows of war

“Dance on the cliffs”