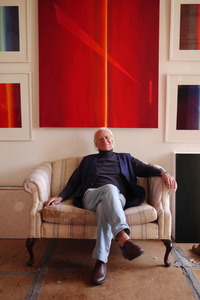 As a Fellow of the Institute of Civil Engineers I worked for many years at the Consulting Engineering firm of Felix J Samuely and Partners. ( Samuely worked with the Bauhaus Architects before fleeing Nazi Germany and setting up in England. ) Previously to this I was a site Engineer on the Post Office Tower London responsible for its verticality.

Initially at Samuely and Partners I was involved with the re-building of St.Thomas’ Hospital,opposite the Houses of Parliament, and the development of one of the new Universities, Warwick . My speciality became inner city re-developments taking responsibility for numerous multi-million pound projects all over England.

This complex work required the ability to see the essence of a problem which encouraged and defined my love of the simple and minimal that has become a feature of my paintings. I decided to commit myself to full-time painting in 1993 and attended the Chelsea College of Art and Design. Following this I spent the next six years at Great Western Studios in Central London, that houses some seventy studios and about one hundred and twenty artists.

I have a life-long interest in both Jungian and Transpersonal psychology, the poet Rumi and icons. These influences are reflected in my paintings, which in part are studies in form and colour recalling “inner landscapes”, and in part invitations to travel internally without defining a destination. My larger work is intended for public spaces where the vibrant colours and clear forms enhance the environment.

Having been interested in poetry from an early age I have produced seven small volumes for private circulation and had poems published in anthologies.

For July 2004 I was invited to be at an Artists Residency organized by the Fundacion Valparaiso in Mojacar, Spain which led to marriage and immigration to the USA where I am re-establishing myself and carrying on my career .

A study in colour and underlying images

Reaching across the line

A study in colour

An abstract image of summer fields

The Light cutting through the Night