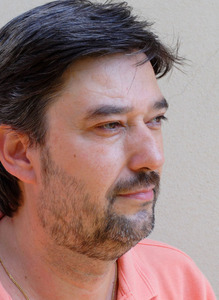 Alessandro Gambetti was born in Vicchio del Mugello (Florence) in 1959.
In 1977 he got his Diploma at the Liceo Artistico and in 1983 he got his Diploma in painting at the Accademia di belle Arti (The fine Arts Academy) of Florence.
From 1999 he is a regular art teacher at Scuola media in Montalcino and in San Quirico d’Orcia (Siena)
In the same year one of his painting’s picture is choosen by the Amburgo’s Agency (Germany) for an important advertising compaign
In 2001 he is nominated academicians for the International Academy “Greci Marino” (literature, art and science Academy of Verbano in Vinzaglio-Novara).
He took part to several public artistic exhibitions like Arte Padova in Padova, “Cromaticos” ( a painting exhibition in Castello Estense in Ferrara),art-expo in New York (USA) and more recently at the show “Firenze Arte” (the Pergola art gallery in Florence), finalist artist at seventh edition “National Price of painting and Sculpture “Città di Novara” Novara, at the first edition of Biennal Exhibition of Contemporary Art “Opposite Reflexes” (ex S.Charles Barnabiti Church, Florence).
He has organizes some personal exhibition in Florence, Siena, and in their environs. The public and the opinions have appreciated his works
His artworks are in several italian and foreigns web sites.
Recently he has been invited and included in the virtual Saatchi Gallery of contemporary art- London, and in the international network -touchofart.eu.
A large part of his artworks are found in private collections in italy and abroad.
At present his artworks is the result of the study of the human figure representing its many different signifant ranges (ironic, allegoric, symbolic, surreal, deformed), from the visual perception and how the two dimensional image can be seen in three dimensional; The use of new digital technique manipolations (computer graphic), that through creativity and the knowledge of the technique instruments, combine in continuous research work and in a new aesthetics painting development.

Of earth, air, fire and water.
Gambetti’s imagination moves in a dimension of neo figurative structuralism.is quest has evolved in a continuous process from expressive representations strongly influenced by primitive art (especially African), to a freer and more personal interpretation which, in most recent times, has exploited the discovery of the new language of so-called “computer graphics” which has profoundly revolutionised the way art is made, and has led to a new aesthetic of image creation.
Lately, the artist has enjoyed graphically reworking subjects that already belonged to his cultural heritage , giving birth to a sort of “theatre of the memory” whose evocative emblematic expressiveness is both intrinsicallyenigmatic and, at the same time, fascinating.
Besides the originality of the subjects, the graphic vision that Gambetti hasdeveloped over time contributes in no small way to his works.
Especially in his more recent “graphic elaborations” and digital “photo-paintings”,he uses formats that enhance descriptiveness and give further scope to a variegated universe of shapes/figures, deformations of symbols and allegories.
Here two themes, that are at the same time both very distinct but yet very close to each other, merge. These themes are on the one hand the great tradition of Italian Renaissance painting, and on the other, modern and contemporary art.
We notice that special attention has been paid to H.Bosch, Peter Bruegel, M.C .Escher, Andy Warhol, Max Ernst, René Magritte, Storm Thorgerson;artists who are very disparate but who share a similar unrestrained freedom of creativity, which reveals, intact, the mysterious meaning of life and of all things.
Gambetti tries to give form and shape, an order to this variegated pictorial world, by applying an interpretative theory in which both man and nature are contained and unified. This theory, which is applied with strong and evocative chromatic effects, is based on the four primitive elements, earth, air, fire and water.
According to the ancients, these four elements were governing principles, rather than physical forces.
They were evidence of the intimate essence of life in the cycle of continual evolution. Consistent with this theory, the painter has carried out works that are mutations, metamorphoses and reflections of human faces in these four basic elements.
The shape of some of these works is remarkable and significant.
They are sequences painted on long rectangles – real modern predelle.
Just as the classical predelle supported polyptychs and altar-pieces in churches, here, similarly, these predelle take on the role of supporting and validating (with their symbolic meaning) a secular sense of life and nature.
Among these works, I find the predella dedicated to the element earth impressive and evocative.
There are also some disquieting aspects in the cocoon-face, which opens to let the butterfly emerge; perhaps as if it wants to say that Man’s journey towards Nature (or the reflection of Nature in Man) contains dark and unpredictable aspects within itself.
Gambetti’s painting, with its underlying theme of the four elements, expresses the vitality and creative energy of the painting process, which is no mere imitation of nature but becomes a personal, original interpretation of it. We can certainly affirm that Gambetti is an inquisitive, sensitive painter who is undergoing continual evolution.

We live in three-dimensional space. We take for granted that something can be in front of or behind something else; that It can be near or a long way from us.
Imaginary representations on canvas, on paper or even on a computer screen just have two dimensions.
Is it possible to see as three-dimensional, images that have two dimensions, like a painting or a photo?
Yes, if we can “deceive our brain”. This is what happens with stereograms. By “stereograms” we mean two-dimensional images which, if looked at in a different way, reveal three-dimensional images that were hidden at first sight.
It’s easier to understand if we put it into practice. Have a look at “Strawberry Wood”, for example, on page.... of this catalogue. Maybe you can already make out the hidden three-dimensional image without any instructions. If not, place yourself at about 50 centimetres from the picture; look at it, but don’t focus on it; on the contrary, let the focus go to infinity. You will notice that the objects in the picture seem to double and their outlines become unclear. Then, as if hanging in mid-air, a new three-dimensional image forms. Probably you’ll have to try hard for a few minutes before learning the technique, but it’s worth it. You will be amazed at the sharpness and depth of the image that has formed under your eyes.
Through this technique of the transposition in three dimensions, I want to value in an optical way the
realizazion of my works, proposing a pratical teaching on the way of looking “beyond”.

The author’s surreal compositions are not a bedlam which includes everything, or a supermarket trolley where we put everything for fear we might forget something.
Each element is in its exact position, the one Gambetti wants, in the pose or with the expression that is appropriate, that gives the best rendition of the character in the play.
Learned quotations (Flemish paintings, Bosch, Surrealism, De Chirico), an interplay of literary, philosophical and pictorial cross-references and evidence of habitual good reading are the basis of Gambetti’s photo-pictorial compositions.
Air, Earth, Water and Fire are all present in each work, identify it, permeate it to such a degree that we are led to recognize each individual sign in the wealth of evocative objects brought to the “readers” attention.
Angels and demons mingle: hidden truths mirror one another and reveal themselves; deadly sins have Earth’s consistency or Air’s lightness, Water’s liquidity or Fire’s strength. The founding alchemy, the one the artist proposes, is the culmination of a collection of samples of human nature that lives together with a humming bird, that sees itself in a reflecting surface, that is pierced through, that disappears in a stream or inexplicably breaks into pieces.
In more than one volume, Gambetti’s works deserve to be read page by page, image by image in an attempt to both recognise the (different) signs of humanity and acknowledge them in ourselves.

As if his interest were the repetition of a pattern, the artist builds his work by representing a real metamorphosis.
However, it’s clear that the author’s interest is not the pattern itself, which is only a means, but the evolution of a subject that he analyses in all its stages and that leads to the final metamorphosis.
The whole passage from one body to another is under our very eyes when we look at “The Fish’s Riddle”, but it’s much less evident when we place ourselves in front of “Three: here, in a sequence reminiscent of frames of film , the female body begins to take shape beneath our gaze and, though the birth is not complete, we know that with the repetition of the image the process will be fully accomplished.

Creator of images that he composes with great ability through a careful research.
An artist gifted with sensibility that he puts in his works rich in glamour and creativity.
Master of art,teacher, his works are affected by the strenght of an excellent preparation that explodes in
composing his works of art. Gambetti, tuscan, master of sure harmony, placed in the unique context of his
city, he becomes a great performer of it.

Works published on catalogues and on the web

2001- multimedia Cdrom “Living in Val d’Orcia” –educational project conceived and carried out by Prof.Perinti Alessandro (cover and inside cover)

2007-Opposing Reflections- catalogue of the first edition of the Biennal of Contemporary Art-Florence- December 2007 (pag.18-19)

2009-www.blurb.com- pubblication of the personal book “Us and them” works from 2006 al 2009 by Alessandro Gambetti in american web site
www.blurb.com/bookstore/detail/1139478

2012- blurb.com- pubblication to the catalogue “Revelations” for the personal painting at the Sala Rosa located in Siena
http://it.blurb.com/books/3055872

“Welcome to the machine”