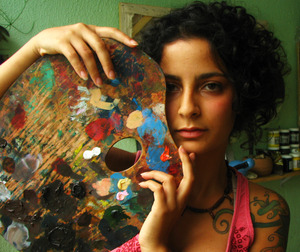 Clarice Gonçalves’ works sublimate Brasília. All the concrete of the city’s modernist architecture is translated in the immensity of the sky in its blue, orange, yellow, pink, ochre palettes; in the immensity of the clouds that transit the spaces of the vast sky just like people transit the empty spaces of the city; in the immensity partaken by this people who have in a multicolored, contemplation-inviting sky much more than a sea.
The painter is part of a generation of artists that are breaking new ground in Brasília and awaking for the world. Better yet—a group for whom the world awakes. Gifted with a relation with space much different from that the urbanites from other cities have, this generation draws to the capital of Brazil the attention that Brasília’s rock music once has attracted.
Clarice is one of the artists in this generation that transmits an incomparable lightness in her regard upon the feminine. Part of the artist’s creative process starts through a survey of images on the internet, which places her at the top of the contemporaneity trend: casting her gaze and interpretation on images that are not necessarily in her context, and appropriating them with the unmistakable mark and style of Clarice Gonçalves. This style is composed of strong strokes, thus creating lots of texture, and of the fluid stains, denoting a counterpoint of much lightness. Another peculiarity when it comes to her workspace is the diversity of canvas’ formats—she does not stop at the monotony of the straight line, but rather asserts her autonomy and questions all the aspects of the painting. Full of density, the works’ titles are brief poetic narratives of thought, stay clear from the obvious, and invite—better to say, incite—the onlooker to think beyond the static. The best definition of the recurrent portrayed stare of Clarice’s women, always capturing the attention, is rightfully the title of one work of hers: the surreptitious slant of unsettling stares [o soslaio furtivo de olhares inquietadores]. It is hard to be a mere spectator of her portrays and not feel like a witness of something that may not be the same a few moments later, due to a feeling of familiarity that borderlines a déjà vu, a rare, subtle feature which gives us a sensation of intimacy with the scene represented, as if the painting gathered from each of us something from our personal history.

Clarice hasn't uploaded any images yet. Please check back soon!