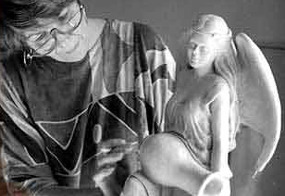 Vonnie had always been involved with the world of art in one way or another. During the early 80’s, she managed the Chameleon Gallery in Mosman, NSW. It was here that she met her future husband Johannes - a painter / writer whom she married in 1982. Together they set up a Design Studio in Neutral Bay which they managed successfully for 17 years.

Vonnie and Johannes (El Ostarico) have two children; Johannes Junior (24); and Brigitta (27). In 1999, no doubt giving in to a bout of madness, the family moved to Restoration Island, a remote outcrop in the Coral Sea. The idea was to set up an eco-tourist resort. This venture wasn’t crowned with success, but after nearly two decades of dealing with the world of commerce the family enjoyed a well earned rest as well as appreciate the beauty of the extreme far north.

Returning to Cairns late the same year, Vonnie wasted no time in reinventing herself. Rather than working her way back up, and without a moment’s hesitation, she started at the top, asking the then Cairns Mayor (Kevin Byrne) to sit for her. Kevin obliged and a few days later Vonnie appeared on the front page of the Cairns Post proudly presenting “Little Kev,” as the Mayor referred to his likeness in clay. Many sculptures followed and in September of 2004, she won first prize at the 68th Annual Art Exhibition organized by the Cairns Art Society with the piece “My Friend Joyce;” (See Website).

In June 2011, Vonnie sold a bust of Dame Joan Sutherland to her husband; Sir Richard Bonynge.

Vonnie’s entire portfolio can be seen on the web: